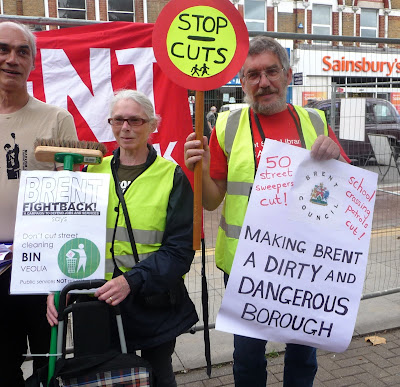 Most residential streets will now be only swept once a week, compared with three times under the previous administration which vowed to make Brent  'a cleaner borough'. The seasonal leaf service will be stopped with even Labour councillors warning of accidents when elderly residents slip on wet, decomposing leaves. Local solicitors should open their files now ready for a rush of custom in October when the cuts are implemented and the leaves (and the elderly) fall.

The Labour council are still reviewing school crossing patrols but intend to cut them forcing schools which want to ensure that their children are safe to pay for the crossing patrols themselves. This is a departure from the basic understanding that road safety is a responsibility of the whole community and provided through that community's local council which residents  fund.

I was just going to add as a joke that perhaps local businesses will start sponsoring lollipop patrols with their logo on the back of high visibility coats - then realised that this Council will probably leap on the idea. Or perhaps we'll end up with 'pay as you cross' with the kids thrusting 10p into the hand of the crossing patrol officer to see them across the busy roads with the ones unable to afford it having to cross at their own risk!

The full report on the street cleansing cuts can be found HERE
Posted by Martin Francis at 19:54:00

When will people wake up and realize what we are up against?
I don't care what anyone says, I believe that any government That will allow the public to abuse themselves with tobacco which then causes no end of people to die every year in what it is meant to be to be a christian country, we cannot and should not expect that government or the councils to put principles first.
the streets are dirty because the people make it dirty and the council does not make sure that the people charged with cleaning our streets and pavements do the job they are paid for by our taxes properly.
but strangely enough the minute we genuinely forget to pay our council tax for example, we start to get reminders which then become threatening letters and the last resort is being taken to court by the council for non payment of the council tax.
yet when was the last time we heard of the council being taken to court for not doing its job properly?
with the council's shameful record of neglect it is a wonder it does not find itself in court everyday.
yet you look and see how often local people are taken to court by the council and yet the council rarely does it's job properly and gets away with it all the time.
so rather than wasting your time walking up and done waving placards, do something more effective such as promoting the disposing of litter properly and if it works it will put the council and government to shame because here they are cutting one thing after the other and yet continue to do a lousy job in return for the excessive amount of money they pay themselves while our borough becomes dirtier and dirtier by the day.