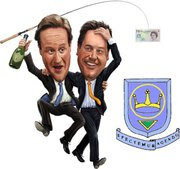 Following last term's controversy over the Kingsbury High School governors' decision to apply for academy status and a student strike calling for more consultation, the headteacher Jeremy Waxman has organised a series of meetings to discuss the plans. He has told parents that without academy status the school will be forced to make redundancies:

The main advantage for Kingsbury High and our communities is that funding will come directly from the government rather than via the Council and, because it comes direct, the funding is at a higher level.

This will help in two very important ways.

Without Academy status, the school will be forced to make reductions in the number of teachers we employ to the detriment of the education we offer.


If Kingsbury High were to convert to Academy status we will continue to be active partners in the educational community. We have a long history of leading sport in the borough. And with our local primary and special schools we have formed the Kingsbury Schools Together partnership. These partnerships will continue if we convert to academy status. We will also reassure our staff by committing to their current terms and conditions.


By 1st August, over one thousand two hundred of England’s secondary schools were already academies or had applied to become one. That’s 40%. Soon it will be over half. I do not want Kingsbury High to be left behind.


I have been Headteacher at Kingsbury High for over 18 months now. I have loved working at the school, getting to know you and your children. I have been proud to lead the school from the poor Ofsted verdict it got in 2009 to a position where in July 2010 we were judged “Good with Outstanding Features”. That success has given us the opportunity to apply for Academy status. I ask for your support in making this decision for the good of the future of Kingsbury High and the communities we are proud to serve.

Waxman fails to note that the additional funding will be at the expense of other local schools and the local authority and that there is no guaranatee that it will continue to be funded at the higher level as the academy and free school projects expand.  There is further documentation on the school website HERE. There appears to be no provision for the through going open public debate that opponents of academies requested.
The school's written questionnaire for parents and carers is HERE and there appears to be no provision for the wider community to make submissions or an independent ballot of all concerned.

Students are urging pupils to attend  to make their views known and are seeking lunchtime meetings for those who can't make it after school. The student Facebook page is HERE

The timetable for conversion is short but the Department for Education is likely to make a decision on the application in early September before the consultation is completed. An employment Question and Answer paper is being circulated to staff early this term and the consultation closes on September 20th. The full governing body, which voted for the application by 15 votes to 3 on July 14th will decide whether to convert at their meeting on September 29th. If they vote in favour the provision date for conversion is December 1st 2011.