ESOL REPRIEVE - more to fight for

The Dept of Business, Innovation and Skills (BIS) led by minister John Hayes has reversed its decision to make cuts to funding which would have excluded up to 75% of adults on so called ‘inactive’ benefits. 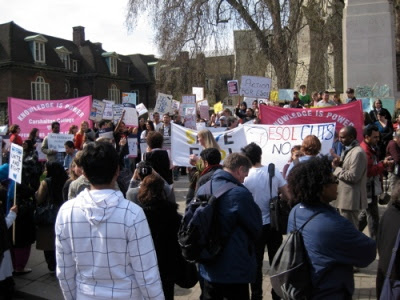 This attack represented a huge threat to adult and further education affecting some of the poorest students in inner cities mainly from Black and minority ethnic backgrounds especially women who desperately want to learn English to support their children, find work, access education and play a full role in their communities.

This means most of the 250,000 adult places that were are risk this year can be saved and is an important victory for the Action for ESOL campaign.
The campaign included parliamentary lobbying by MPs, National Institute of Adult and Community Education (NIACE), the principals’ association (AoC), Refugee Council and the University and College Union (UCU). In addition colleges up and down the country held ESOL teach-ins and demonstrations which gave ESOL students a voice and exposed the hypocrisy of making some of the poorest people in society pay for a crisis not of their making.

In London over 500 hundred ESOL students and teachers participated in a teach-out near Parliament and marched to Downing Street to hand in a 20,000 strong petition to Save ESOL.

The u-turn means that the money is now there for ESOL. Colleges across the country have already begun to contact students who were turned away, asking them to come back and enrol for classes this year, refund students who had been charged fees, and some ESOL teachers who had been made redundant are being re-instated.

The reprieve is only for one year and the campaign still needs to fight for asylum seekers and those on working tax credit who have been excluded from the concessions.

This victory shows that campaigning together, ESOL students with the wider community and trade union movement, can work. Campaigners are now in a much stronger position to fight to defend ESOL and the eligibility changes planned for the coming year and the strength of the campaign can be used to go on the offensive to reverse the attacks on community Outreach provision, access to Adult Education and the defence of post-16 education. Is an important turning point in the campaign to defend ESOL and all Adult education and signals a way forward to address some of the frustration and inequality that people feel which fuelled the recent riots.

Thanks to the Education Activists Alliance for this  LINK
Posted by Martin Francis at 15:36:00