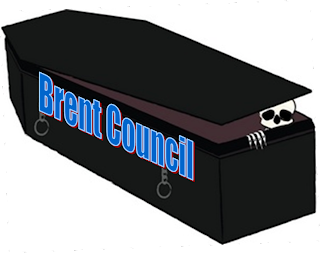 In what at times seemed to be a valediction for Brent Council, Cllr Ann John told the Wembley Area Consultative Forum, that by 2014 the Council would be much smaller. It would have withdrawn from the provision of many services, schools would be out of local authority control and school services would be greatly reduced or have gone completely. In what she said was a 'bleak picture' she said the Housing Benefit Cap would move many families out of the area.

In reviewing the cooperative arrangements with other West London boroughs through the West London Alliance, she said that this opened the way for some to press for much bigger local authorities, a London Borough of West London, which would put local democracy as we know it at risk in the future.

There will be a further £14m cuts in the next financial year following the £42m this year. 540 council jobs have gone in the last 18 months. Ann John said that although the Budget Report had said that the freeze in Council Tax was undermining the long-term council finances but Labour had a manifesto commitment to keep it low and no London borough planned an increase. There were signs that attitudes may be changing with some Tory councils in revolt.

Challenged from the floor that given the Coalition cuts the Council was not able to deliver the services required by Brent residents and that the Council needed to campaign against the Coalition, she gave the example of cuts in the popular park warden services. She said that this contributed to children's and women's safety and had led to an increased use of parks but it was an optional rather than core service and so had been cut. She said that we needed a groundswell of opinion  to approach the government.

Asked about whether the new Civic Centre was now too large for the much diminished Brent workforce she said that it was much more than office space for council bureaucrats and would provide library, arts and retail space.

Obviously the New Civic Centre is insufficient as they are building another one in Willesden Green ... why? Actually, we in Willesden DONT want another Civic Centre. We want our Library, Our Bookshop & Our Old Library Listed Building to stay.
We want a manager who is not squandering taxpayers money at the Willesden Green Library Centre. (Im free)A good coffee shop (Starbucks or other)! Reopen the cinema/theatre & let the upstairs room day, weekend & evenings. Any Councillers listening.. ...... ... silence....