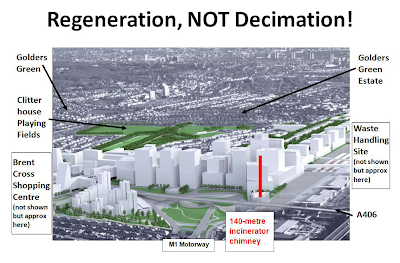 The Brent Cross Coalition has  welcomed the collapse of what they call  'the grotesque, car-based Brent Cross scheme'. However. they say it is totally unacceptable to still go ahead with the 'easy-profit shopping centre expansion', which they have been told  told is a 'possibility'. Neighbouring Brent Council fought this successfully in the late 1990s, and is likely to again.

The Coalition for a Sustainable Brent Cross-Cricklewood Plan say:

We demand the whole plan is scrapped, and the arrogant local developers, and their ineffective PR company, are removed from the project.


Measures in the new Localism Act mean that over-bearing property companies, in alliance with the conceited Barnet Council, cannot get away with “business as usual”. This is a great day for people-power – not Hammerson plc and not Mike Freer (former Barnet leader, now MP).


We want development based on people’s aspirations for a sustainable, low-carbon, exciting regeneration of the area. This means starting from scratch, and will also obviously have to wait for improvements in the economy.


The developers have wasted many years – not ONE home has been built, not ONE transport improvement. Barnet Council has also wasted many hours of work in promoting something nobody wanted - their web site still estimates 29,000 extra cars every day in the Brent Cross area, which would cause traffic misery.

The developers have just received planning permission for a small building at Brent Cross – but have resorted to making the application from a tax haven in the Channel Islands. They have no shame, and are behaving no better than bankers.


“The regeneration was always a mirage; despite the PR spin, the developers were only ever committed to building a few hundred new housing units anyway. In return for cheaply purchasing large swathes of public land, their main return to the local population would have been gridlocked traffic. I hope the next deal is more transparent, and involves a stretch of light rail to link to local tube lines.”


“What we are being offered now is little different from the rejected shopping centre planning application of 13 years ago. We will still get lots of extra traffic, but no transport improvements. The developers want to 'pick the low-hanging fruit' of what pays out quick profits. The Brent Cross Waste Incinerator seems to be a dead project now, but we will continue to campaign, to make absolutely sure.”

David Howard, Chair of the Federation of Residents Associations of Barnet, said:


“The Brent Cross Cricklewood development would have had a negative impact on the infrastructure and the environment of much of North London and for generations to come. Brian Coleman cannot quote my phrase of “hobbit homes”, since he has done nothing to stop the scheme, and we have. We need the public land at Brent Cross to be kept out of the hands of the developers, and corridors across it reserved for future light railway to Brent Cross Northern Line station, and to other local areas.”


"Unfortunately, this probably means that the developers and Barnet council are trying to get what they wanted all along, which is the expansion of their Brent Cross 'out-of-town' shopping centre, with no other benefits. This is something that my borough, the neighbouring London Borough of Brent, fought long and hard, but successfully against, in the late 1990s. That included making a convincing case at an appeal inquiry to a Planning Inspector, who found in our favour. The Brent Cross Coalition and Brent Council may have another fight on their hands!
Posted by Martin Francis at 15:58:00