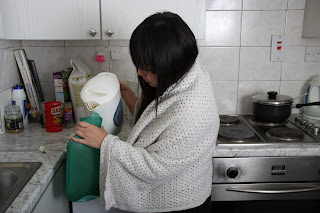 Brent Citizens Advice Bureau, in conjunction with the Tricycle Theatre and with the support of Joanna Lumley, is asking generous Brent pensioners to donate their winter fuel payments to the CAB’s Winter Warmth Fund.

Brent CAB’s Winter Warmth Fund has been running since 2008 and helps vulnerable Brent CAB clients each year with by giving them a donation of up to £200 directly payable to their fuel supplier.

Over a period of three years the bureau has allocated a total of £7,300 to 38 families and individuals in need.

The beneficiaries are people who are affected by fuel poverty: in particular those with a long-term illness, elderly people and families with young children. Brent CAB assesses the impact the money will have on their financial difficulties before choosing a client to donate to.

Nationally, celebrities such as Sir Terry Wogan and Helen Mirren are supporting a similar campaign – the Surviving Winter appeal - which calls on those who do not need the money to donate it to a fund for those in greater need over the winter.

Fuel poverty (people spending 10% or more of their income in heating) is a growing concern in Brent. Every year 50 people die in Brent because of the cold weather. This is more than three times the national average. This is why Brent CAB has opened their Winter Warmth fund for a fourth year running and is urging Brent residents for donations.


A Brent student with a young child who received a Winter Warmth donation last year said, “The grant was extremely helpful as I live on a ground floor flat with my child and it is very very cold. Without the money I would not have been able to pay my heating bills”.

Another recipient last year had been waiting 4 months for HMRC to pay her owed Child Benefit and Tax Credits and was in severe financial difficulties. She said, “I would like to thank you for helping me pay my gas bill, it is great that people in need can turn to you. I am very happy that I could pay for heating for me and my seven children.”

One recipient of the award last winter was a single parent working part-time supporting three young children including a baby. He had a fuel bill of £745 which he was finding very difficult to pay and was therefore very grateful for the grant. Another recipient had a 7 month old baby and had no money for her prepayment meter to heat her flat. So she was immensely grateful for the £200 grant, which was paid directly to the meter, as otherwise she would have had no heat.
Posted by Martin Francis at 09:40:00