Cllr Butt challenged on 'untruths' and 'misrepresentation' in Davani case

Philip Grant has written to Cllr Muhammed Butt drawing his attention to the letter published in last week's Kilburn Times (see below) .

Philip said, 'You are welcome to reply to it, either to the newspaper or personally to me, if you feel that I have misrepresented anything. I look forward to hearing from you.'


Butt’s statement on the Rosemarie Clarke case, which Philip’s letter in the newspaper was responding to, was originally issued privately, just to Brent's councillors in their weekly "Members' Information Bulletin", claiming to set out the facts of the case, allegedly in the light of  'untruths' and 'misrepresentation of the judgement' by unnamed persons. Those people only had the chance of a "right of reply" after his statement was leaked to "Wembley Matters". 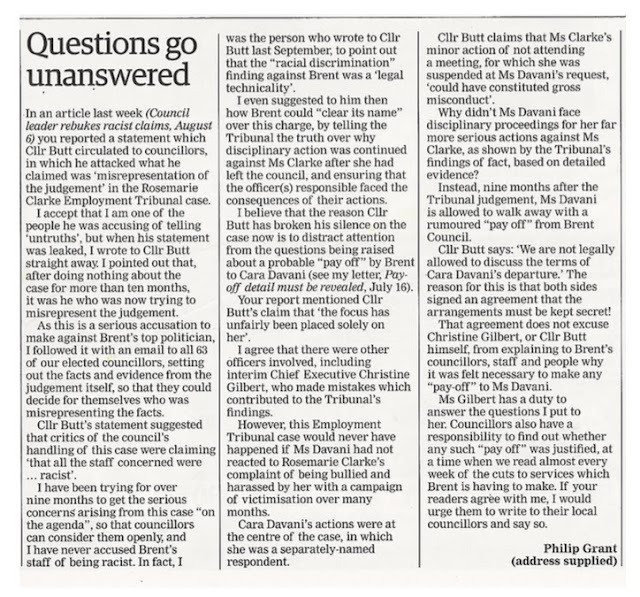 Our so-called leader is a misleader - how does he/they get away with it?

Thank you for your support, Anonymous at 12:27, but I am definitely NOT a "superstar".

I am just an ordinary local resident who has become fed-up with the lack of integrity shown by some senior Council officers and politicians, and feel that someone needs to say to them: "this is not right". In this particular case, I thought that "someone" could be me - you can't always expect others to "make a stand" on your behalf.

I certainly can't guarantee that my actions will make them change the way they behave, but I hope that by publicly drawing attention to what is going on it will make them think twice before they abuse their power in future.

P.S. As I have said to B&K Times readers at the end of my letter above, and in an earlier "guest blog", if you live in Brent and agree that the Council needs to "come clean" about any "pay off" to Cara Davani, please email your local Ward councillors and tell them so. Thank you.

On this matter regarding payoffs; Dawn Butler MP, Ernest Ezeajughi and Sabina Khan were written to 26 June 2014. Date clearly identifiable. Corresponders clearly identifiable. Contents clearly asking for support and for the matter to be raised at appropriate scrutiny committee and Brent full council meeting with the aim to tackling payoffs or pay outs from public funds to individuals who may have engaged in unlawful conduct and decision making... From politician to corresponders STILL NO ACKNOWLEDGEMENT OR REPLY YET!

It looks like these people need regular reminders. They are probably hoping that by forgetting and not answering the awkward questions will go away.

Reminder letter receipted for: Cllr Ezeajughi cannot escape. Dawn Butler MP will be facing a number of residents soon and it will be one of the subjects. Cllr Khan well?... Jeremy Corbyn MP will get information too and the Socialist Party. Brent council staff members who else suffered similar detriment after Rosemarie Clarke? Which one of you will come next? Guaranteed, if you stand (or sit) by and watch how people are spoken to in an appalling way and treated with utter contempt, you must expect similar treatment toward you and yours. It is a vicious cycle. Looking forward to some niceness, all the time, the next time we visit Brent Council offices... PS Cannot understand why the trade union seconds and paid officials (and Shop Stewards and Reps) at Brent are quiet on this one...

It's good to know that questions will continue to be asked in an attempt to right the wrongs that Rosmarie Clarke and others' have suffered and continue to suffer in Brent. Brent has become a toxic place to work in recent times of austerity but has been made worse by an unprincipled, immature, and cliquish leadership that doesn't really give a toss about Equalities and treating people with dignity and respect. This toxic leadership has filtered down to other managers and deputies, and employees with lesser status are made to fear for their jobs. They are afraid to question and challenge anything, which has a ripple affect on the community they are paid to serve. The recognised trade unions, Unison & GMB, have become so beholden to Brent (their paymaster) they no longer have any clout with the employer. They have become a sad weak joke. Members are wasting their money paying membership fees and should seriously consider joining a proper trade union - one that is not afraid to represent them and challenge important issues.

all I will say on this matter is that when I have tried to approach Cllr Butt via twitter and email,
neither receives a response.
and this is the leader of Brent Council...the Council that likes to remind us that they Listen to us.
It's Just strange how the Leader himself suddenly goes blind on my account?
but he never fails to miss an opportunity to appear on a radio station to talk himself up.
Oh I just remembered he is a Councillor!!!!
that mean's I'm not worthy of his attention ; 0 (
right...I must start my own private radio station and send the Link to cllr Butt!!!!

Anon,
of all that you said,
the one thing that stands out to me is when you wrote about "This toxic leadership" which are paid to serve the community.
if Brent Council serves the community
where is the evidence to prove it?
don't worry I'm not having a go at you,
I'm simply highlighting the hypocrisy and insincerity of Brent Council.
and as for members wasting their money paying membership fees?
well,
maybe they enjoy throwing good after bad?

its a tired old game they play with us Anon,
it's like putting a piece of string in front of a cat and waiting for it to reach out
only to see it left frustrated as the string is pulled away.
to me we are the cats and the council are the string holders who keep on pulling the string and leaving us evermore frustrated.

Its always good to read your insights.

You are not alone. Cllr. Butt has not replied to any emails I have sent him since September 2014, when I first wrote to him about the findings of fact about Cara Davani in the Rosemarie Clarke Employment Tribunal judgement. He has not even bothered to defend himself in response to my revelation that he was misrepresenting that judgement in his statement to councillors (although that may be because he knows I was correct in saying so).

Cllr. Butt doesn't want to know what we think, or perhaps he doesn't want US to know about why HE he is bending over backwards to "protect" Cara Davani.

You may think that he views you as 'not worthy of his attention'. In my case, I think he regards me as (please excuse the Americanism) a pain in the Butt.

The "cat and mouse" game continues - can those in power at the Civic Centre find a way to stop the "two questions" being asked at the Full Council meeting on 7 September? See:-
http://wembleymatters.blogspot.co.uk/2015/08/cara-davani-will-brents-full-council.html