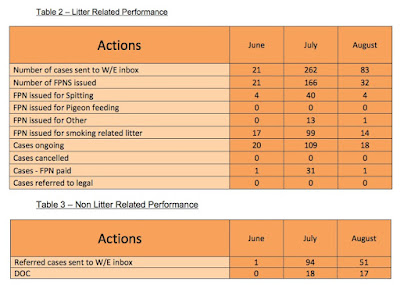 Members of the Public Realm Scrutiny Committee may have their work cut out on Tuesday when they review an officer report LINK on the Council's uniformed litter patrols that have replaced Kingdom Security after the Council decided to bring the service in-house.  It is a pity the Cllr Duffy was removed from the Committee, he may have been able to make sense of the figures.

I was struck by the difference between the July figures in the table above compared with June and August and asked for clarification. (W/E stands for Waste Enforcement). I received the following explanation:


There are a number of reasons why there is a differences in the numbers :

1)    Number of officers patrolling ; At the moment there are 3 officers patrolling , with a further two being recruited into in due course . Meanwhile , kingdom had 6/8 officers patrolling during the same period last year.
2)    Enviro-Crime Enforcement Patrol Officers do not only issue Fixed Penalty Notices for littering , they have other duties which do not carry instant FPNs , for example inspections of business for waste management compliance and searching waste found illegally dumped on the street.
3)    Greater public awareness of the offence of littering , due to high profile TV and newspaper coverage over the last year or so.


I am not convinced and perhaps the answer was addressing year on year comparisons which the officer's report explains: During June to August 2016 Kingdom Officers issued a total of 1028 litter related FPN’s in relation to 219 FPN’s issued by officers during the same period in 2017. This difference can be attributed to Kingdom initially providing a team of up to 8 officers in the early stages of the contract, vacancies arising during the transfer of staff, public awareness on littering since June 2016 and an approach that now looks at the broader spectrum of waste related crime – i.e. illegal rubbish dumping.  If income from fines are supposed to make the service self-sustaining and perhaps provide an income for environmental improvements there is clearly a long way to go.

The deployment of the team of five outlined in the report is challenging to say the least:

The team is currently being deployed to specific geographical areas within the borough. This has proved particularly effective in curtailing Paan spitting which has historically been very difficult to tackle. They are also deployed in response to complaints from members of the public, Veolia, as well as requests from Councillors and community groups to provide a high- visibility presence in illegal rubbish dumping hot-spots and to tackle specific local issues such as dog fouling, vermin feeding and other similar environmental issues. An important task is to response to reports of dumped waste flagged by our contractors, Veolia. They have also been involved in community assurance patrols which include weekend and evening work.
On 1st September 2017, the team will be fully equipped with the latest technology which will enable officers to issue on the spot FPN’s using mobile phones and portable bluetooth printers. For the safety and security of the officers, new body worn cameras will also be used. The technology provided to support the officers will be the best available in the current market.
Of the 4 Patrol Officer posts, 2 are yet to be filled. The rationale is that these posts will be offered to redeployees, then advertised internally before being offered externally.  Deployment
The purpose of the team is currently as follows:
Issuing FPNs for witnessed littering / dog fouling / spitting / bird feeding offences,
Searching waste found dumped for evidence and then to referring this back to the Enviro-Crime inbox for senior members of the team to investigate, and
Preliminary waste management (duty of care) inspections on businesses referring any suspected non-compliance for further investigation.
To engage with members of the public on environmental issues which are affecting their neighbourhoods.

A Wembley warrior who's tired of the disgusting stste of Brent said...

Yes these figures on the basis of the data shown are very interesting! Does the data for August 2017 represent those for the full month or those of part of that month? If they are for the full month then this warrants further investigation and further breakdown. Indeed I would like much further information and breakdown of the data to be made available to ensure that this service really achieves its aims and aids in sorting out the disgusting state of the borough and does so in a cost effective manner.
It is indeed a shame that Cllr Warren is no longer in this committee; his ability to really get to the bottom of things like this and ask probing relevant questions to shake out underlying facts and figures is much needed. Who are the members of this committee now?

Do you mean Cllr Duffy?

I think you need to make a correction to this article Martin. You have written that Cllr Duffy was "removed from the Committee". This is untrue.

Labour members of the Scrutiny Committee are elected by their fellow backbenchers amongst the Labour Group. These elections take place every year at the AGM.

Cllr Duffy was elected in a by-election by back benchers towards the end of the 2016/17 municipal year when a member of the Committee left to join the Cabinet. This was despite him getting his nomination papers in after the deadline and there being no female members of the Committee at all.

At the 2017 AGM the whole Committee had to be re-elected for the 2017/18 municipal year. Cllr Duffy chose not to run again and didn't put his name forward to be on the committee.

This is hardly a sinister "removal" as your original article implies.

The post by Unknown may well be the explanation why Cllr Duffy is no longer on this committee(and may well have been as a result of a response by Cllr Duffy to what he felt was going on within Brent Labour Party and some of his colleagues) but it does not affect the fact that we as residents and tax payers no longer have Cllr Duffy on this committee with his ability to deeply analyse presented data, ask searching questions and get to the real nitty gritty. We need such people on this committee.

Cllr Duffy responds to 'Unknown': How can they explain that I am not on any committee never mind the scrutiny , committee everybody was given a committee . Some Labour members are on more than one committee, only in the anti - democratic Labour leadership can that be considered Fair.

I won an election fair and square and the leadership removed me because I exposed the cabinet decision to knock - down the Granville centre and the adjoining school and the money they had wasted on employing Kingdom securities . So the leadership made sure I am not on any committee so I cannot challenge them .

Unfortunately for Cllr Butt I successfully challenged them at the last council meeting, where the leadership wanted the our poorest residents to pay for fire safety measures via the housing revenue account ( rent) . I was stoped from talking at the group meeting and was threatened with disciplinary action by the Leader if I did not support the officers’ report. However many of the Labour group and Tory groups supported me forcing Cllr Butt and the CEO (this was after the head of finance had to clarify if we agreed the recommendation the full cost would fall on the poorest residents in Brent) to accept the amendment saying the cost would not fall on our residents alone.

Do you think that "Unknown's" comment and Cllr. Duffy's response to it deserve a blog of their own? More WM readers would then see the two sides of this issue, and make up their own minds as to which version they accept.

John won a place on the Committee the first time round "fair and square" as highlighted (well almost fair and square, he didn't put in his application until the day after a well advertised deadline which in many cases would result in disqualification, so hardly a Labour Group conspiracy against him) but this was at a bye-election and so at the next AGM the whole committee had to be re-elected in a democratic process.

Guess what, he neither put in an application or turned up to the meeting. In these circumstances how could he possibly expect to be put on the scrutiny committee? I mean how? Should the rules for elections not be followed and Cllr Duffy just be appointed to the Committee because he thinks he deserves it?