When was American Football first played at Wembley?

There has been at least one NFL “International Series” game played at Wembley each year since the new stadium opened in 2007. Many people would claim that the first American football match played in the old stadium was in 1983, when Minnesota Vikings beat the St. Louis Cardinals 28-10 in an NFL Global Cup game.

The FA’s Wembley website takes the first match at the old stadium back to 1952. Then the venue played host to the final of the U.S. Airforce in Europe football championships, with the Fuerstenfeldbruck Eagles beating the Burtonwood Bullets 27-6. However, there is now evidence that the history of American football at Wembley goes back even further, to the Second World War.


When Quintain were carrying out their major refurbishment of the Wembley Arena about ten years ago, some clips of old “newsreel” type film were discovered. These had probably been collected by the former Wembley Stadium company, which was set up by Arthur Elvin in 1927, to buy the Empire Stadium and save it from demolition after the British Empire Exhibition.

During World War Two, Elvin used the stadium to host many charity and sports events for the armed services, and was knighted for this in 1946. Among the old film clips is footage of an American Football game, with U.S. and other service men and women in the crowd, as well as local residents. There are no details of the date (probably in 1943 or 1944) or which teams were playing. Here are a couple of grainy “stills” from the film, which help to provide a taste of the occasion. 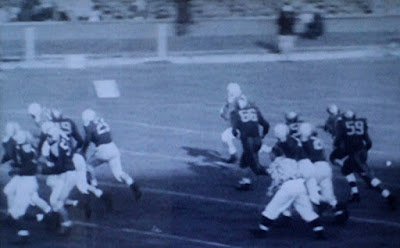 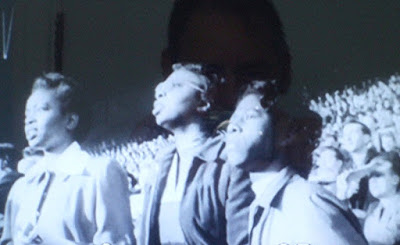 American football was not the only U.S. sport that Wembley Stadium hosted during the war. There are records of a baseball game played there in 1943 between teams representing the U.S. Air Force and U.S. ground forces stationed in England, in preparation for the invasion of Europe the following year. There are clips of film showing that game, including the players being introduced to Clementine Churchill, the Prime Minister’s wife, who was guest of honour at the event. Here is a baseball “still” for fans of that sport, and of our local history. 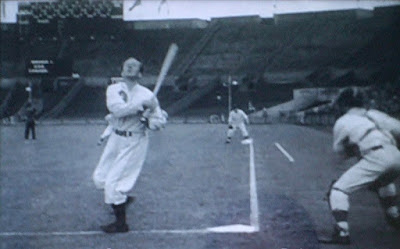