Is the consultation about the future of Alperton's 'The Boat' a secret? 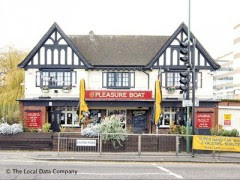 The regeneration proposals for Minavil House and the former Midland Bank/The Plough pub sites at Alperton have attracted opposition  LINK so that may explain why a consultation about the future of The Boat (formerly The Pleasure Boat) 346 Ealing Road has been very low profile to say the least.

Rumour has it that this site is destined to be more flats and it is unclear whether like The Plough developers will want to retain some kind of public house or community facility.  Few would deny that the pub is run down at present (see below) but it has historic interest as the starting point for pleasure cruises along the Grand Union Canal in the 1850s.

The consultation is at Peppermint Point (previously Middlesex House) which is between Sainsbury's and the canal.


This is what the website InsideTrack had to say about The Boat in 2014:
HERE