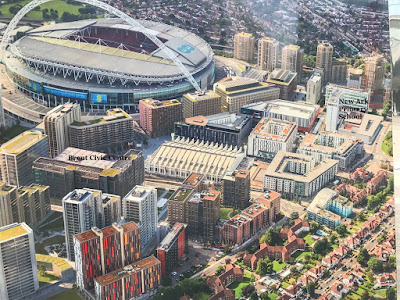 I don't often quote the Daily Mail but a recent comment by columnist Charles Sale LINK may ring bells with Wembley residents regarding concerns over over-development of the site by Quintain. As a Green I support a mainly public transport venue but it is clear not everyone is happy with current arrangements.

One of the biggest financial blunders in the history of the FA would have been apparent to fans at Wembley on Monday night as the huge car park nearest the stadium is no longer in use.

This is because work has started on the latest building development by all-too-close neighbours Quintain to construct 500 new homes on the site.

Apart from the inconvenience of parking now being further away — which the VIPs will not like — the project is taking place on land that could have been FA property if more vision had been shown two decades ago.

In 1999 the FA only had the funds — courtesy of a £120million Lottery grant from Sport England — to buy land for the stadium but none of the surrounds now being exploited by Quintain. For less than the £35m it cost Liverpool to buy Alex Oxlade-Chamberlain from Arsenal, however, the FA could have bought the whole 85-acre site and staged the London 2012 Olympics there.

Instead, one of the world’s great stadiums is hemmed in on all sides by Quintain projects.

The whole damn area looks like a Lego set! It's a sort of "Oh look there's a spare piece of land, let's just plonk another high rise building on it" attitude by Quintain & of course supported by spineless, gutless & clueless Brent Council.

'One of the world’s great stadiums is hemmed in on all sides by Quintain projects.'

For once the Daily Mail has got it right. It's a pity that they, and the other national media, did not speak out sooner, before it got to this stage.

I so agree with your comment Sandro. It does so remind me of the efforts of the two young sons(aged 7 and 4 years) of a friend of mine over 2 very wet days of the school holidays a few years ago. Each boy was determined to be the last one to build a block and so more and more were squeezed onto "the site" and the tower blocks were made taller and taller until every available Lego block had been used up. Perhaps you have hit upon the secret of how Quintain design their developments.

Well said Philip. I just guess that they were not fully aware of all the development that was in planning stages until it hit them between the eyes. The same can also be said re the Civic Centre where it was much applauded for its architectural design and then the planning committee of the same council allow all that architectural merit to be dwarfed and hidden by tower blocks of no architectural merit on all sides.