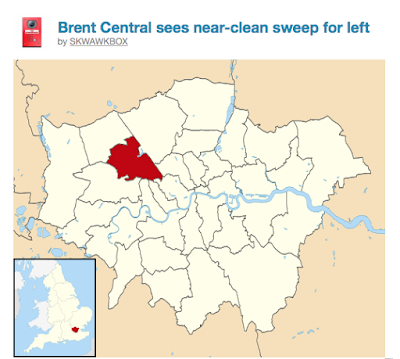 With Cllr Abdirazak Abdi proving to be as courageous at revealing the short-comings of Brent Council as his Kilburn ward predecessor Cllr Duffy and Brent Central Constituency Labour Party swinging to the left, this has not been a good week for Muhammed Butt, leader of Brent Council.

The Kilburn Times LINK followed up my story of a week ago  LINK about South Kilburn residents being faced with eviction by the council, without their councillors being informed of a crucial  meeting about the issue. Cllr Abdi minced no words when he accused the Labour council of social cleansing.

Abdi is strongly backed by Kilburn Labour Party which is still campaigning over his removal from the Planning Committee by Cllr Butt. Now the Brent Central Labour Party looks as if it too will be a thorn in Butt's side with the left winning all but one officer position in the CLP  LINK.  Significantly the left filled all 10 places on the Local Campaigns Forum (LCF) which organises councillor selections and election campaigns.  The CLP also nominated at 6 left slate candidates for the National Constitutional Committee elections.

The LCF result may be most significant in the long run as it sets priorities for campaigns over the coming period when Butt and his cabinet are putting forward a cuts budget LINK and continuing the council's unhealthy close relationship with developers.

Cllr Butt has been criticised for not doing more to fight the local government cuts and for not signing a key letter protesting against the cuts signed by other council leaders. However, he turned up this week at the Local Government's Association lobby of Downing Street over funding and managed a photo opportunity with Nick Forbes leader of Newcastle Council and the LGA Labour Group.

It will take more than the odd photo opportunity to persuade Butt's critics that he is responding to their concerns.

Hitherto, opposition to Cllr Butt's leadership has been more about his personal leadership style and controlling approach rather than policies. The relationship between Brent Council Labour Group and the three local CLPs (Hampstead & Kilburn, Brent Central and Brent North) in terms of the latters' ability to influence specific policy is ill-defined and the Council leadership have been able to shrug off or ignore critical motions.

The LCF may now become the forum for a battle over the future political direction of the council.

According to the "Kilburn Times" report, pictured above:

'Cllr Muhammed Butt, Leader of Brent Council, said: “It’s always been made clear to those households taking up the short-term tenancies in Hereford House and Exeter Court, that it is a temporary solution until these properties are demolished as part of the regeneration scheme.

“We have also been open and transparent about the help that the council can offer when those works are set to take place, which is as much help as we are practicably able to provide.

“While any short-term housing solution is not ideal, it is far, far better than having these properties lie empty for up to several years awaiting demolition, when they could be used to help people on a temporary basis."'

While I agree that it makes sense for the flats to have been lived in, rather than being left empty for up to five years, I think that Cllr. Butt is missing (or deliberately avoiding) the main point.

Many of the families have children at school in Kilburn and/or have at least one parent working in the area. They are being told to find themselves private rented accommodation and offered (it appears) £250 - £270 p.w. to meet the rent.

Look online for private rented flats in NW6, and the cheapest two bedroom flat you will find is £325 p.w (and that is one double and one single bedroom). Typically, you are looking at £380 p.w (plus hundreds of pounds in agents fees), with some at over £500 p.w., and little security of tenure.

Is that what Cllr Butt would like if it was the family of one of his relatives?

Yes, there are major things wrong with the housing market. There is a huge shortfall in the affordable social housing stock available, in Brent and elsewhere, and many families in need of such housing.

When I worked for housing associations in the 1970's, we had fair rents fixed by an independent Rent Officer (for both housing association and private lettings), and ALL of the homes we renovated to modern standards or built were affordable homes.

Now, even with public money (from the Mayor of London) going into a recently approved housing association scheme in Wembley Park, only around 30% of the flats to be built will be "affordable". The Mayor's London Plan, and Brent's own planning guidelines, say that there should be at least 50% of affordable homes on all large developments.

Yet only one Brent councillor on Planning Committee voted against accepting that application. And he was removed from the Committee by Cllr. Butt just a few days later!

Apart from photo opportunities, and we see plenty of those, what leadership does Butt show on dealing with the real problems people in Brent are facing???

ha ha Phillip "Is that what Cllr Butt would like if it was the family of one of his relatives?"