What future for the Wembley Park tile murals? 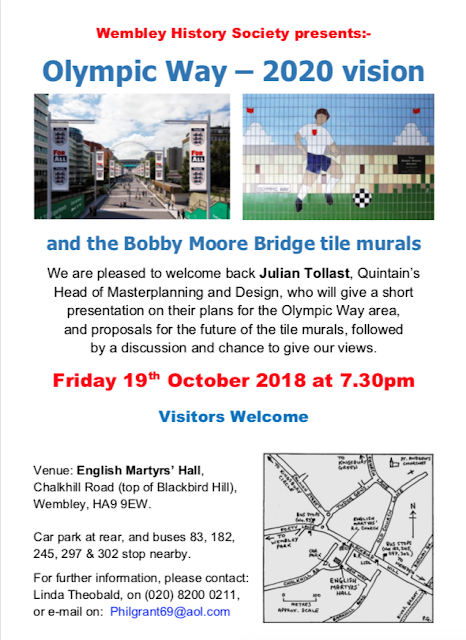 
Last April, I let readers know about an effort by Wembley History Society to persuade Brent Council and Quintain to uncover the tile murals in the Bobby Moore Bridge subway, which have been covered with advertisements since the autumn of 2013 LINK.

At first there was little response from them, but by chasing up through correspondence, the Society's chairman, Jim Moher, managed to get a meeting with Brent's Chief Executive and senior Quintain officials last month. It appears that they might be willing to uncover at least some of the murals for a time during 2019, and possibly 2020 (Brent's year as London Borough of Culture), and to make some other proposals for the future of the murals.

It was agreed that Quintain's Julian Tollast would give a presentation to the Society about their plans for the Olympic Way area, and their proposals for the tile murals, and receive feedback from the meeting about these. That meeting will take place on the evening of Friday 19th October (see poster above for details). As with all Wembley History Society meetings, visitors who are interested in the subject are welcome to attend (there is usually a £3 charge for non-members, but I am not sure whether this will apply for this particular meeting).

The origin of this advertising on the subway walls appears to have come from Council officers, seeking to raise money for Brent to help reduce shortfalls caused by government funding cuts since 2010. My researches have shown that in all of the officers' reports on which decisions involving the advertising have been based, they have carelessly (or carefully?) avoided any mention of the tile murals which the adverts would cover up!

However, the meeting on 19th October is not about this. It is an opportunity to listen to the proposals which Quintain (and Brent Council) are offering. It is also a rare opportunity for the Society's members, and others who are interested in Wembley's heritage, and in this piece of public art celebrating the history of sports and entertainment at the Stadium and Arena, to express their views, and hopefully have some influence over the future of the tile murals.

Philip Grant (writing as an individual).
Posted by Martin Francis at 14:22:00

Thank you to the visitors, as well as History Society members, who came along to this meeting on Friday evening.

It was an interesting presentation by JT of Quintain, followed by a good discussion with him and one of Quintain's design consultants. W.H.S. will certainly be following up on this matter, and hopefully, something worthwhile will come out of it.

Notable by their absence was anyone from the Brent side responsible for the Bobby Moore Bridge, or the decision to allow Quintain to cover the tile murals with adverts. It's as if they want to pretend that it is nothing to do with the Council, even though they (on our behalf) own the subway and the murals!