Following feedback from councillors Brent Council officers have tabled revisions for the 2 options on new ward boundaries that would reduce the total number of councillors from 63 to 57.  The number of councillors representing each ward varies in the two options. There are some minor changes where particular streets are transferred to a different ward and Wembley Stadium is moved to Wembley park ward, Two further models are also attached which address concerns that Kensal Green ward should mirror the community's identity and the creation of a one member  Barnhill ward.

The Conservative Group gave notice that they were submitting their own proposals to the Local Government Boundary Commission for England (LGBCE).

The General Purposes Committee will be discussing the proposals at their meeting on October 31st 5pm, at Brent Civic Centre. It is the only major item on the agenda. 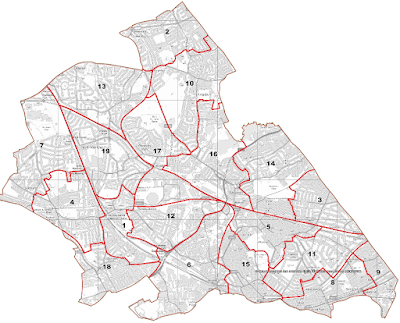 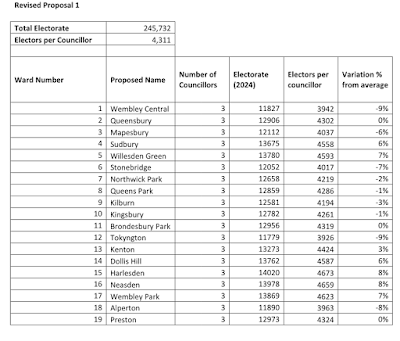 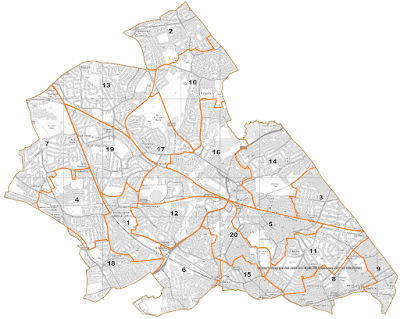 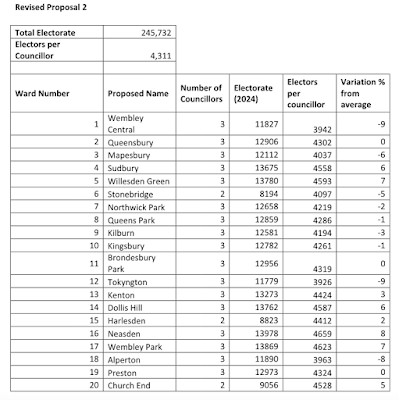 In Option 2 the wards with only 2 members are Harlesden, Stonebridge and Church End. As can be seen these are not far from the average of electors per councillor although it might be argued that the nature of the wards generates more than average casework.

There is much more detail in the reports including responses to councillors' submissions and detailed maps of the proposed wards and the Barnhill and Kensal Green models. They can be found HERE.


﻿ Dear MS DownsI note that the Council is struggling to prepare an acceptable package for submission to the Boundary Commission.The Commission has set a number of parameters including reasonable match with average number of voters per Councillors but also sensible ward boundaries matching natural and recognisable areas that local residents can relate to.Until some 20 years ago Brent had mostly 2 member wards (with only around 3 member wards). At that time Brent was reformed into around 20 x 3 member wards in the unrealised expectations that the then Labour Government would force elections for London Boroughs to be reformed so that Councillors retire in 3rds.As a result of these changes wards names such as Cricklewood, Brentwater, Kingsbury and others were lost. Local people lost their links with their natural local communities with very much larger wards being created which destroyed those links.The current requirement to re-ward Brent again is an opportunity for radical change which revives some of those natural communities that local people can relate to. Two member wards should be revived to achieve this. This also has advantage of creating smaller more manageable wards (yet still large enough with around 8,000 electors) that Councillors can get to know much more easier.In the case of the area I am familiar the previous changes scrapped Barham Ward which had been created as a memorial tribute to Titus Barham 1st Charter Mayor of Wembley and a major local benefactor. The current proposals recommend moving areas such as Maybank, Rosebank, Fernbank and Greenbank Avenues and other areas close to Sudbury Town into Northwick Park Ward. These areas have absolutely no connection with Northwick Park.Pursuing my suggestion for 2 member wards will give an opportunity to recreate Barham Ward around Barham Park while creating both Sudbury Ward and Northwick Park Ward of sensible size and to include areas which local people genuinely recognise as either Sudbury or Northwick Park (or even Sudbury Court as Northwick Park used to be called before).Similar benefits will arise by recreating 2 member wards in other parts of the borough thus recreating wards with represent natural communities.I note that an item is coming back to the Council’s GP Committee responding to Councillors concern. The risk is that taking this approach simply responds to ‘political considerations. The Council is still fortunate to have in its ranks staff who have been with the authority for 30 years or more. They can assist in contributing to this exercise by reminding those offers doing the number crunching of the natural community areas that existed and still existed in Brent. Their knowledge should be used to help in creating wards which meet this aspect of the Boundary Commission criteria.I trust that this suggestion will be considered and pursued.

Unfortunately, as I said in another comment earlier today, Brent Council's website for committee meeting details and other "democracy" matters responds with:

I have now discovered that the problem was on my own laptop. I have accessed Brent's "democracy" pages so many times over recent years that my internet search engine was blocking any further access to them, until I cleared the backlog of "cookies" (?) which had built up for that web address!