A Labour Party event but open to all on an important topic.
From Hampstead and Kilburn CLP 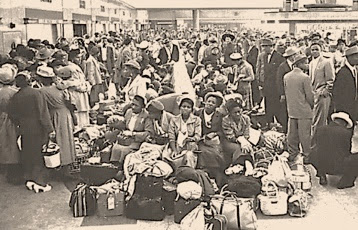 Hampstead & Kilburn Labour Party is holding a Black History Month event to mark the 70th anniversary of the Empire Windrush arriving at Tilbury Docks (1948). The ship carried over a thousand passengers, mostly from the Caribbean (but also Burma, Mexico and Poland) who had been recruited to leave their homes to rebuild Britain after the war.

While Home Secretary, Theresa May imposed a ‘hostile environment’. She said that British subjects who had uprooted themselves and their families at the invitation of the British government, their children and grandchildren, now had to prove their right to be in the country they helped rebuild and worked hard in, often for the lowest pay. People have been sacked from their jobs, robbed of their homes, benefits, pensions, and denied healthcare. Some were put in detention centres and sent back. Many still live in fear of deportation. Others died from the suffering inflicted by these racist policies. Many are still waiting for recognition of their citizenship and for compensation for the years of injustice and insecurity they suffered.
This event will give a platform to Windrush families and many others affected by racist immigration laws as well as by austerity cuts, which have targeted women and people with disabilities.

Labour’s grassroots membership, spearheaded by BAME women, won a landmark motion at Labour conference to support the Windrush generations. A growing movement is calling for an end to detention, deportation and destitution of any of us.
Jeremy Corbyn and Diane Abbott have pledged that a Labour government would abolish racist immigration laws and end the requirement for landlords, employers, teachers and health professionals (and even MPs) to act as border guards on behalf of the government.  We’re inviting all our communities – African, Asian, Caribbean, Latin American, immigrant and native born, with or without papers, to take part. We want people to know what’s been won and what obstacles we still face.