CORRECTED: Will Brent be London's dirtiest borough after ending of residential litter picking? 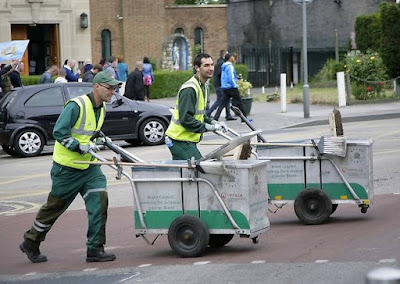 THIS IS A CORRECTED VERSION OF THE ORIGINAL STORY AFTER I SOUGHT CLARIFICATION FROM BRENT COUNCIL. (My original impression from the cuts document was that street sweeping in resiential streets would end completely.)

Under proposals rubber-stamped for consultation by the Brent Cabinet weeklylitter picking of the borough's residential streets  would end in 2019.  At the same time litter bins would be removed. Sweeping of the streets once a week will continue.

Cuts in 2011 LINK reduced residential street sweeping to once a week and Brent Green Party predicted this would make Brent London's dirtiest borough. Now litter picking of our residential streets would be ended completely.

The proposal is listed in the B category of the budget  deemed 'difficult' as it would impact on standards of service and  prove unpopular. However it could well be implemented as the categories range to D 'most difficult'.

The reduction would require a negotiation with Veolia, Brent's out-sourced supplier of waste collection, street sweeping and parks maintenance.

The timetable would require a decision by late 2018/early 2019 with a communications strategy launched from January-March 2019.

The report does not give details of any job reductions presumably because these fall on Veolia rather than directly on the council.

Proposals affect other environmental areas including reducing parks to a 'reactive' service and the dimming of the borough;s LED street lights.

Really bad news if true. I complained to the Council a few months back & copied in on my email to them my local Councillor about the road sweeper in our area as he was absolutely bloody useless. Luckily with the help of my Councillor Veolia took him off our round immediately & gave us back our original sweeper who is a lovely guy & ever so good in sweeping the roads in our area. I don't understand why they rotate sweepers in different areas from time to time? I believe I don't fall under a residential street so I shouldn't be affected but it's really bad for residential streets as even in these areas the build up of crap in general on the pavements is really bad. Maybe Mr Butt can divert some of the £17 million that he's giving to Quintain for some concrete steps to ensure that all our roads in Brent are kept as clean as possible & to ensure that street bins stay where they are!

This may be stating the obvious, but if people didn't drop litter in our streets we wouldn't have to pay someone to pick it up.

Keeping sweepers and removing litter pickers is a good way forward in my opinion, the latter is far too slow at delivering the quick results we need. Not sure I've ever seen litter pickers before other than in parks.