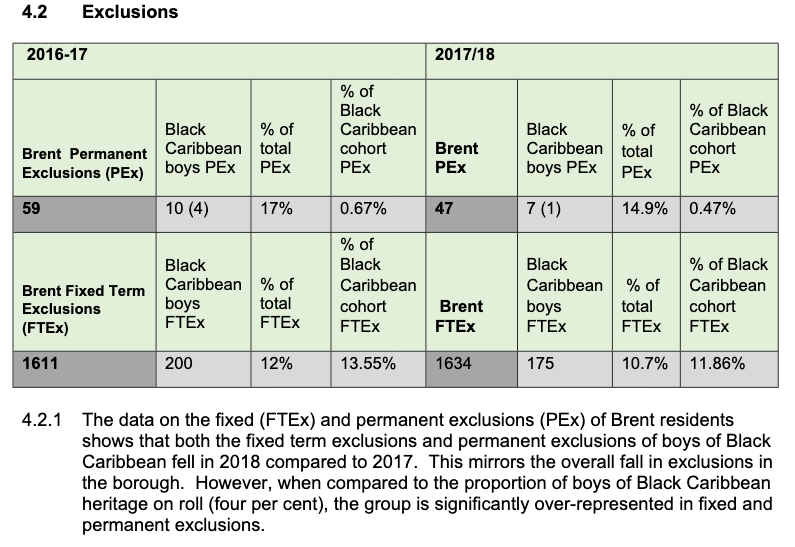 Monday's Community Wellbeing Scrutiny Committee will be considering a report they requested from the Strategic Director for Children and Young People on the Council's efforts to improve the educational achievement of boys of Black Caribbean heritage. This is a welcome move, not only because this is a long-standing issue but because it marks an increased level of interest in education by the committee which called for the report after being given the statistics at an earlier meeting.

A close look at the reports above will reveal the main dimensions of under-achievement.

Although Brent secondary schools are mainly academies, while most primary schools remain with the local authority, the Council retains an interest in all schools through the Brent Schools Partnership (BSP).

Although white disadvantaged boys are the most 'under performing' group nationally and locally, Black Caribbean boys in Brent  are the only group that has continued to underperform over the last few years.

The BSP set up the Black Caribbean Strategy Group, chaired by the headteacher of Chalkhill Primary School  which has become the BSP Specialist Centre for Black Caribbean Achievement. Chalkhill was chosen because of the quality of its work with Black Caribbean boys and their families. Over the last 2 years  the Centre has shared their best practice with other schools through training, school visits and shared activities including aspirational careers events and advice.

The report states that the project has undertaken:


·      A supported rigorous and robust analysis of the performance of pupils of Black  Caribbean heritage and the effectiveness of key aspects of schools’ practice to  ensure the pupils achieve well.
·      The designation of a Black Caribbean Achievement Champion in every school in  Brent for a period of two years. The Champion will lead on the school’s plan to improve outcomes for pupils of Black Caribbean heritage, including monitoring its impact and engagement with parents/carers.
·      A programme of half termly training for Black Caribbean Achievement Champions to ensure high levels of skills and competencies to deliver their role effectively, leading to real impact on outcomes in schools.
·      A programme of training for groups of staff and for school governors.
·      The development of online resources for parents on strengthening their role and  contribution to improving their children’s learning and progress, and reducing the likelihood of their children being excluded from schools. This would provide links to opportunities for accreditation, face-to-face advice and workshops. The resources will draw on the experience and expertise of local community groups.
·      Leadership and management of the overall Black Caribbean Strategy, including regular collation and analysis of the attainment and progress of pupils of Black Caribbean heritage.

The project is very much focused on ensuring the best possible provision for every boy. It is important to state that over 40 per cent of the group are meeting national expectations for results at the end of the primary and secondary phases, and their success must be celebrated alongside the success of the majority of pupils in Brent. This project is aiming to ensure that the boys in the 20 percentage point gap also attain their full potential. The evaluation of provision in each school will identify the factors that affect the group and individual pupils which may vary across the borough. It is important to avoid any over-generalisation of the factors that may be affecting the boys who are underperforming. The Champion is instead expected to monitor the data for every boy which includes their attendance and progress data (that school leaders usually collect from teachers every term), and to put in place the appropriate actions and interventions that address any individual boy’s underperformance.

The late Basil Bernstein noted decades ago that 'education cannot compensate for society.' By that he meant that schools alone could not solve society's problems. It is worth remembering that when so much is expected of schools, although of course they work extremely hard to give pupils an equal chance and this project is a big step forward.

It was with Bernstein's quote in mind that I suggested at a recent Governors' Briefing on the Black Caribbean Strategy that the Council needed to situate the initiative in a wider context which would include addressing some of the issues where the Black Caribbean community feels it is not being fairly treated. The most high profile example at the moment is the future of the Bridge Park Complex but there are others including the closure of Stonebridge Adventure Playground, the cuts in the youth service and the closure of Children's Centres. Nationally the Windrush Generation scandal and Theresa May's hostile environment have increased uncertainty and disaffection.

The Scrutiny Committee takes place on Monday 18th March, 6pm at the Civic Centre, Wembley Park and is open to the public.

The full report is HERE