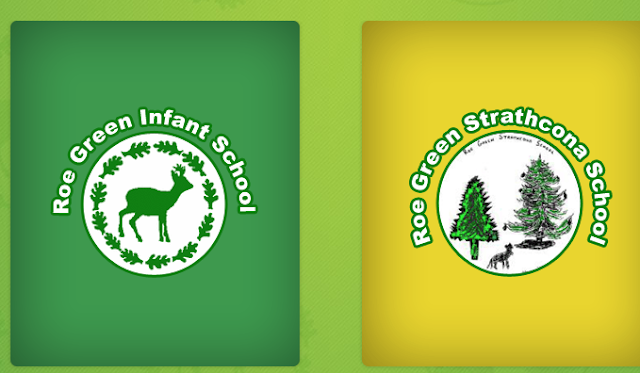 Extravagant thanks to the staff of Roe Green Infants School for providing extra places for primary children over the last 6 years cut little ice at Cabinet on Monday when it was decided to consult on the phased closure of the Strathcona site in Wembley which has been run as part of Roe Green Infants under an Executive Headteacher.

Roe Green Infants had come to the aid of the local authority at a time of rising primary school rolls and agreed to run a 5-11 school on a separate site in Wembley.  They are now faced with making staff redundant and as the two sites are run as one school in terms of staffing this will affect both the Infants and Strathcona.

The report to Cabinet stated:


The proposals, if implemented, are likely to impact on the required staffing for Roe Green Infant School; the proposal would lead to a reduction in overall staffing levels which would, therefore, result in the possibility for the need to consider redundancies. The number of staff affected will depend on the nature of a phased closure. There may also be opportunities to reduce the impact on staff, for example, by transferring existing staff to the main Roe Green Infant School site. The school would need to follow the Managing Change in Schools policy and procedure including consultation with affected staff and trade unions to effect the changes in due course.

Gail Tolley, Strategic Director of Children and Young People, said that in 2015-2016 GLA projections had still indicated a rising roll in Brent's primary schools but migration, Brexit and statistical issues meant that projections for 2018-19 had been reduced. There had been a need for Strathcona at the time but it was no longer required as neighbouring schools could absorb the displaced pupils. The report gave the following figures. The key information is in Reception places comparing in the first column the number of available places (PAN - Planned Admission Number) and in the second the number of reception children actually in the school in  October 2018. It can be seen that some of the controversial expansions (see previous articles on this blog, ) created with considerable building costs, have not been successful in attracting pupils and that there are 208 spare places in Strathcona's local area. This is equivalent to a one form entry primary school. 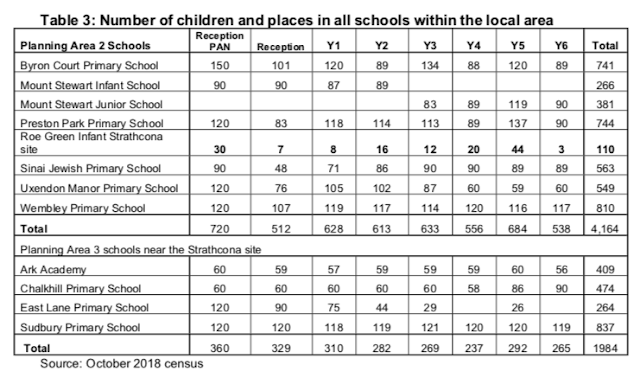 Hidden behind the figures is of course the impact of an uncertain future on the school staff and upset for children and parents who will have to find a new school, depending on when the Strathcona site closes. This will be a matter for the consultation the Council will launch but they have said that new admissions will cease from 2020.

Leader of the Council, Cllr Muhammed Butt, said at the meeting that the local authority had to look at provision and start a discussion with the school and its stakeholders. He said that they would make sure concerns regarding the staff were taken into consideration. The authoirty had to make best use of its resources and the spnding of the Direct Schools Grant.

It is likely if the trend continues that more primary schools will be affected and that the Planned Admission Number (PAN) will be reduced to take account of the demographic changes.  The new Ark Somerville, to be built in the York House car park in Wembley, has been reduced from 3 forms of entry to two and will not take pupils until the demand from new developments in the Stadium area emerges.

The plan to build Ark Somerville Primary School on the car park of York House should now be scrapped.

The site was a poor choice to start with, being surrounded on three sides by tall buildings, with the fourth side a busy road, with both polluted air and road accident risks for any children who attended it. It was chosen with a view to maximum profit for Quintain, who Brent Council are now allowing to build blocks of flats on the much more suitable site (away from main roads, but still within walking distance of Wembley Park Station, and close to the new 7-acre park) which was originally designated for the school, which was promised as part of the Wembley Park redevelopment.

Ark Somerville was planned to open in September 2019, but no building work has yet begun on the site. Now we are told that the school: '... has been reduced from 3 forms of entry to two and will not take pupils until the demand from new developments in the Stadium area emerges.' Think again Brent - don't build it at all.

Interesting to see the figures for Byron Court Primary School. Residents of Sudbury Court Estate were continually told that places were needed for 1050 pupils at the school. The expansion was passed at Planning and building went ahead. From the above chart,pupil numbers are 741 and do not appear to be increasing. The Council certainly misrepresented facts and figures in order to get the expansion agreed initially. In fact it was a done deal from the start. Will they never learn? Let us hope they see sense re Ark Somerville.

This was a stupid idea in the first place and should never have even presented itself to planning, let alone pass. York House has been sold and many of the businesses have been served notice to vacate, some which have been established in Wembley for over 50 years are relocating outside of the borough to neighbouring Ealing as there is such a lack of affordable office space in the Wembley area. York House will then go the same way as many other Office blocks have gone and be converted in to god knows how many 1 and 2 bed live in your Kitchen/Living Room flats, which by design are not suitable for housing families with children. I doubt that many of the professional people who are currently renting or who have bought properties in the Quintain development plan to stay there once they decide to have children as most sensible people will leave in search of a House with a garden. The demand for primary school places has already peaked and is now on the wane, the next places crisis will be in the Secondary/High School sector.

Philip - any idea where this supposed new pocket park is to be located? I thought it was on the site of the old retail park adjacent to Yellow Pavilion and Moore Spice but this currently is packed with cars as its being used as a Car Park!

For the answer, please see my article last July on "Three Lakes at Wembley Park":
https://wembleymatters.blogspot.com/2018/07/many-thanks-to-local-historian-philip.html

The "pocket park" is marked on a Quintain masterplan map (Lake 3). The park will be divided in two by Engineers Way, with the first section under construction between there and the Stadium, while the second section will be on part of the former retail park.