Join Brent4Europe on the People's Vote March on Saturday 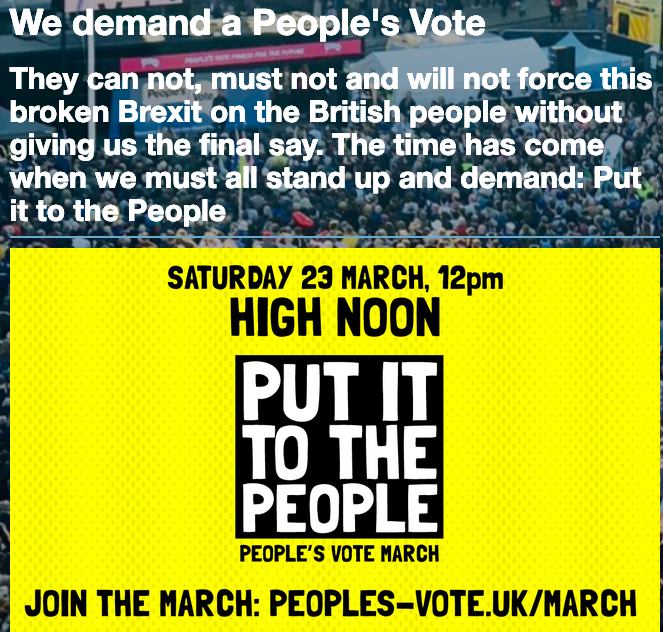 Brent4Europe has invited Brent residents to join them on Saturday March 23rd for the People's Vote March, demanding that the People must have the final say in the Brexit debacle.


The march will assemble on Park Lane southbound, north of the Hilton Hotel.

If travelling to the march via the Jubilee line, please change at Bond Street station and proceed to Marble Arch station before exiting and joining the assembly area. Be prepared for crowd issues which may make Bond Street easier to exit.


To take part in the accessible march / shorter march, please assemble on the marked point at Trafalgar Square.  The shorter march will filter in behind the front of the march as it passes, giving priority access to the accessible viewing area with step-free access next to the statue of Gandhi. WE  ADVISE ALL PEOPLE WITH ACCESSIBILITY NEEDS TO TAKE PART IN THE SHORTER MARCH.

Stewards will be located near Westminster Tube Station street level lift exit to provide direction or assistance to people who will be attending the rally but not the march. They will be stationed here for a limited time only – times TBC – for more information, please see the accessibility policy for the event at www.peoples-vote.uk/march

NOTE – stewards will be in green hi-vis jackets, not yellow ones.

Brent4Europe teams will meet up in advance on Saturday 23rd March.

Join up with our teams at:

11 am at Wembley Park, on Southbound met/Jubilee line platform

Hope to see you at Wembley Park