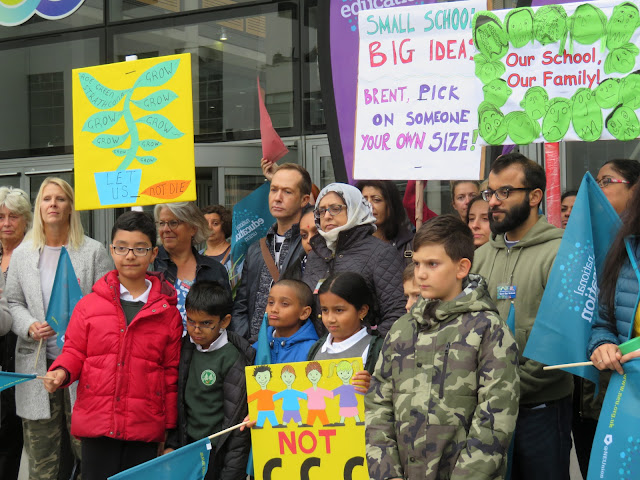 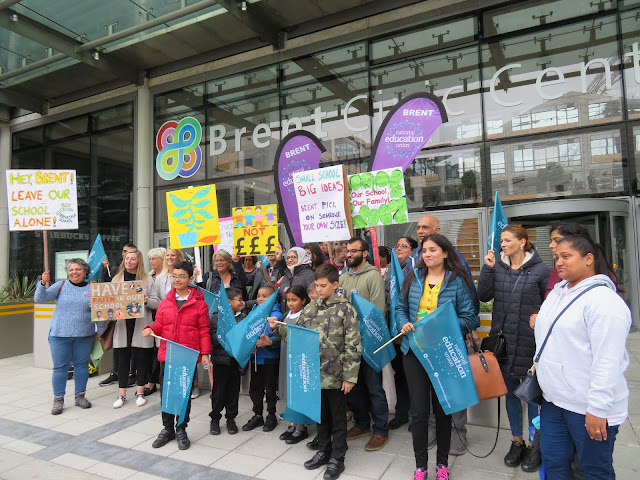 Speaker after speaker, parents, teachers, other staff and supporters passionately made the case for Brent Labour Council not to close Strathcona School at tonight's meeting of the Labour Council's Cabinet. They pointed out flaws in the officer's report: incorrect data, the failure to consider the school's case for additional provision at the school and pointed out Brent's failure to market the school to address spare spaces. The Council itself had asked Roe Green Infants to operate on two sites with additional classes at Strathcona and the staff had fought hard to meet the challenge to make the two-sites operate efficiently despite them between 10 minutes drive apart. Now the Council was citing the expense of maintaining two sites, and the additional funding needed, as the reason for closing one of them.

The Strathcona school is in the top 3% of schools for pupil progress and speakers read out heart-rending messages from pupils expressing what the school means to them. Mary Adossides, speaking on behalf of Brent Trades Council, challenged the Council, asking why a Labour Council was ignoring Labour's manifesto commitment to supporting state schools. Cllr Daniel Kennelly (Preston) attacked the poor report being presented to the Cabinet raising Council leader Muhammed Butt's ire and also asked what a Labour Council was doing closing its own schools.


Apologies for the shaky video at times - there was standing room only at this point in the meeting!

In a closing statement Butt made a speech that became a rant citing the leadership's responsibility to make 'hard decisions' and voice rising began to throw everything into the pot including the proroguing of Parliament in an increasingly incoherent justification for the closure. The headteacher of the school rose from her seat in the public gallery to inform him that as a school leader she knew what leadership really was and that it was not leadership that she has seen from Cllr Butt this evening.

The Cabinet voted unanimously for closure but with determined parents, staff and union we may not have heard the end of it yet.

Having watched the video of Cllr Butt's rant, it is clear that over 7 years of taking difficult decisions has taken its toll on him.

From the glimpses we saw of the Chief Exec's face in the video, she was clearly concerned for his sanity, and we should be too.

He was going on, passionately, of the need for the Council, teachers, parents etc. to work together, for the good of everyone in Brent, but then doing the opposite in forcing through the closure of a school which is a shining example of how that working together in the past has worked well for local children.

Yes, hard choices do have to be made, but when the Leader of the Council makes the WRONG choices (and this is far from the first time) you have to question whether he should carry on in the job.

The pressure of being Leader since 2012 has become too much for Cllr Butt. For his own sake, as well as for Brent's, it is time he stepped down.

I am unable to comprehend why they would close a perfectly good school and yet give planning permission to build a new primary in the car park of York House (soon to be converted to flats) on a very busy Wembley Hill Road?????