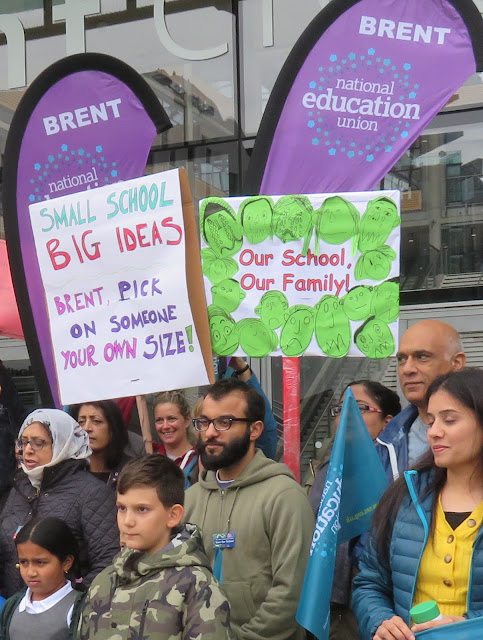 Encouraged by the support of Brent councillors who, as reported first here, have called-in the Cabinet's decision to close Strathcona School for further scrutiny, determined NEU members voted unanimously today to resume their strikes.

In the background both groups have been heartened by the support of Barry Gardiner MP who write to Brent Council back in July opposing the proposed closure LINK. This is a key section of his letter:

If council officers had actively been trying to prepare a case for the closure of the school, these are precisely the measures they might have taken. First ensure nobody knows about the place and even when they live next door, refer them to another school. In fact the head teacher has said that she has several reports of prospective parents who asked for their child to come to the school actually being told by council officers that the roll at Strathcona is full and they can take no more children. I would ask that the cabinet investigate these allegations which, if true, represent a serious breach of trust on the part of public officials.

Of course much of this might be more understandable were the school underperforming. In fact despite all the problems it has experienced, Roe Green Strathcona School is an excellent School, with their first cohort of Year 6 students achieving progress in the top 3% of Schools in England this academic year. This is particularly remarkable when one considers the extent of mid year admissions. In the public meeting held at Roe Green Strathcona on 6th June 2019, which was attended by local councillors, many parents testified to the quality of teaching and the quality of pastoral care that the school provides.

Just 3 years ago Council officers made an urgent recommendation that Roe Green Strathcona School become permanent by September 2016. They are now trying to persuade councillors that the school is not viable. What was then a saving is now said to be a financial drain on the council. What was then required to cope with the primary admissions crisis is now said to be part of an unnecessary and unsustainable surplus. What was then said to provide parental choice into the future is now having its very existence airbrushed from the Council admissions website.

Teachers and staff at the Roe Green School are rightly proud of the progress that has been made since the creation of the Strathcona school five years ago. In a borough where children had been out of formal education for many months, the School has added significant value to the educational development of every child that has entered its classrooms. They have served the council well. If the cabinet were to rubber stamp the proposal to launch a formal consultation for the closure of the Strathcona School site. I believe they would be betraying that service and acting arbitrarily.

Brent Council did launch a formal consultation. In over 300 responses only one supported closure but the Cabinet have gone ahead with closure plans.  Brent North's Labour Party MP is rightly holding his Labour colleagues in the Brent Cabinet to account.

For the NEU this is a much wider issue than just Brent. It is the first attempt at urban school closures since the 70s and 80s when falling school rolls led to school closures and amalgamations and indirectly to some of the super-sized schools that we see today. Brent Labour Council is setting a precedent that if successful, other councils may follow. This is why it is important to win this particular battle.