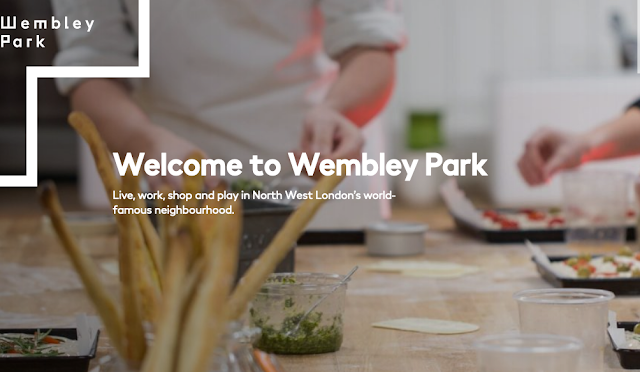 'Wembley Park' Ltd (how did they manage to take over the name of our neighbourhood?), estate managers for the Quintain development have emphatically denied rumours that they intend to install facial recognition on their estate around Wembley Stadium.

In response to an enquiry from Wembley Matters they said:

We do not operate cameras with facial recognition and have no intention of installing them.

This is good news as installation of facial recognition cameras in the Kings Cross development has been extremely contoversial both in terms of their intrusion into privacy but also because of their inaccuracy.

The issue does highlight how much of what was once public space has been privatised and access open to restrictions. 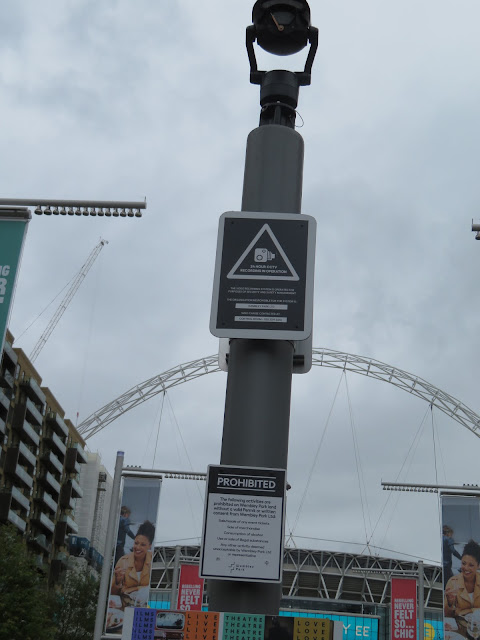 This was brought home to me last weekend when I was part of a Brent Green Party group leafleting for support for the Climate Strike on September 20th. We were giving out postcards about the strike to passersby on the space between Olympic Way and Wembley Library and were  approached by a 'Wembley Park' security guard who asked us for our licence or written permission to leaflet. When we said we had neither he asked us to move out of the area. We could only leaflet on the narrow pavement on Engineers Way. Later when we leafleted on the pedestrianised road (Boulevard) that leads from Engineers Way we were again told to move on.

Not only have they taken over our neighbourhood's name but also our freedom to interact on political matters with local people.

The security notices define what is prohibited on the estate but end with a catch-all statement that gives 'Wembley Park' total control of what happens in the area: 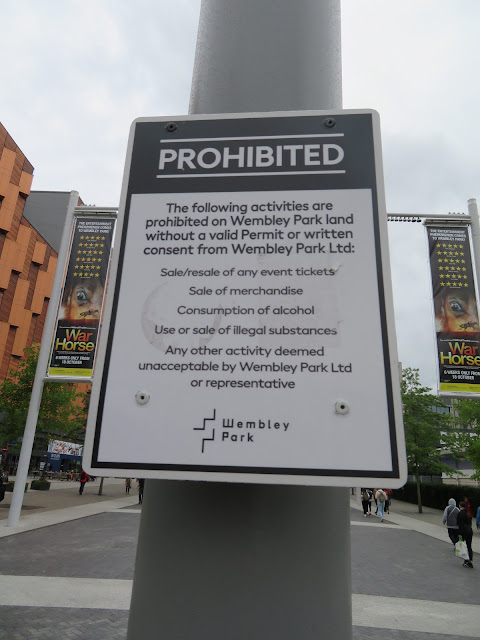 When we queried this with 'Wembley Park' they replied:


Like every well-managed estate, we ask anyone who wants to distribute leaflets in #WembleyPark to approach our estate team for approval and to obtain the appropriate licence from Brent Council.

There was a lot of controversy over the Brent Council leafleting licensing scheme. It was agreed the leafleting for political purposes was exempt: https://wembleymatters.blogspot.com/2012/04/now-its-time-for-james-powney-to.html


Our leafleting was for political purposes as defined by Brent Council. We were encouraging support for the September 20th Climate Action

We believe that leafleting for political purposes is a 'civic freedom' and vital for a healthy democracy. We hope you and Brent Council agree.  https://wembleymatters.blogspot.com/2013/05/petiti

There has been no  further response from 'Wembley Park'.

Since when did Olympic Way stop being Public Realm space?
When was ownership/lease transferred to Quintain/Wembley NoPark?
How much did they pay?
What are the benefits to local residents?
Where can I view the public records supporting this?

What Martin and his fellow leaflet distributors experienced was similar to what happened to me in May, when I was standing in the Bobby Moore Bridge subway, promoting a petition against the "cover-up" (by Quintain) of the tile murals there - see: https://wembleymatters.blogspot.com/2019/05/petition-launched-to-save-bobby-moore.html

It seems that Brent Council has passed the power over what happens on the streets and footpaths of Wembley Park to a private property developer, who can prohibit ANY activity which they deem to be unacceptable.

If they do ever install facial recognition technology on their many security cameras, I suspect that my face and Martin's will be among the first on their "watchlist" of undesirables!

I assume this means we won't be giving them any of our £££s or CIL monies to pay for their modification of the Pedway into Steps. If it's not public realm anymore and controlled by the Council.

I assume this means we won't be giving them any of our £££s or CIL monies to pay for their modification of the Pedway into Steps. If it's not public realm anymore and controlled by the Council.

Martin, would you please find out from Wembley Park Limited where I and the many thousands of Football Fans on our way to a match may purchase a licence or permit to "Consume Alcohol" on their land and how much does it cost? Seriously how are they going to enforce this? The rebel in me is telling me to actually test it, as I am sure that if a private security person tries to physically remove me this can be deemed as assault, as they are not the police!

Can you get a valid permit or written consent to use or sell illicit substances?

Brent Council adopted Olympic Way as a public highway in 1983 (it was originally a private road, built and paid for by Wembley Stadium Ltd, to provide better access to the stadium for the 1948 Olympic Games).

When Quintain bought most of the former Wembley Stadium Ltd land (considered "surplus to requirements" by the new Stadium company) in 2002, they believed that this included Olympic Way, and began looking after it, as if it was.

The dispute between Brent Council and Quintain could have ended in a court case, but at their meeting on 12 November 2012, Brent's Executive (now Cabinet) agreed to "do a deal" with Quintain. Minutes (item 15) are at:
http://democracy.brent.gov.uk/ieListDocuments.aspx?CId=123&MId=1897&Ver=4 .

The position put to the Executive by Officers is summarised as follows:
'Olympic Way needs long term capital investment to bring it to a standard worthy of a key route in the borough and to maintain the route in excellent condition. This report proposes an agreement between the council and Quintain that fairly apportions maintenance costs and income from advertising and other uses and guarantees the long term significant improvement of the route.'

The report, with all the details for anyone who wishes to read them, is at:
http://democracy.brent.gov.uk/documents/s12327/rmp%20olympic-way.pdf