UPDATED: Dilwyn Chambers: A ubiquitous local historian and library campaigner who was passionate about heritage and enjoyed dancing. He will be sorely missed.

Dilwyn Chambers died last week. He was 88.  Dilwyn was a familiar figure to many Brentonians who shared his interest in local history and local issues including the preservation of our heritage and our libraries – a real local character who popped up in the most unexpected of places.

Dilwyn was Secretary of the Wembley History Society in 1974, when Willesden Local History Society was started. He soon joined the Willesden group, and had been a loyal member ever since, tireless in his efforts to promote interest in our local history. Dilwyn had a wide range of interests and was a member of dozens of societies. He attended local community meetings on behalf of the group, always with a handful of WLHS programme leaflets to advertise its activities. Dilwyn always spoke his mind, and will be missed by many people in Willesden and Wembley.

These are some of the tributes  by various members of Brent's two local history societies (Wembley and Willesden), Brent and community libraries, and Brent Museum and Archives.

'It is sad news indeed, as Dilwyn has been a big part of our community for a long time.'

'Very sad to hear of Dilwyn's passing. I had some great conversations with him, he had a vast knowledge. Please pass on my condolences.'

'I am so sorry to hear this news about Dilwyn. This is actually a shock to me. He was an irreplaceable member of WHS, and an often unfathomably challenging Brent Museum and Archives service user. And he will, for all his good qualities and general contrariness, be sorely missed.'

'What a great loss, he will be missed.'

'So sad to learn of Dilwyn’s departure. He was a presence in the local history society and community who made his mark on all who knew him over so many years. He kept me on the mark as chair of the Society, both in meetings and through an endless stream of beautifully-crafted letters containing info from other meetings he had attended (he went everywhere). Also, gentle criticism about what we should be doing, based on his time as an officer.'

'The [Brent] library team were saddened to hear of the death of Mr Chambers.'

'Dear Dilwyn ... too much to say now.  My daughter who danced with Dilwyn at the dance centre above Burton's in Harrow 20+ years ago (photographic evidence is available!) is as distressed as I am.'

'Dilwyn had an encyclopaedic knowledge of subjects he found of interest. I remember him once talking to me about troops at the Battle of Prestonpans using a railway embankment for cover. I briefly considered the possibility that he had gone mad, but it turned out that he was correct, there was a railed 'waggonway' for horse-drawn wagons running to the coast that ran right across the middle of the battlefield, and troops did indeed use the feature for protection in 1745!'

'He was well-known in the Preston Community Library ....  He will be remembered as a great supporter of Library events - especially Saturday night film evenings - and any party where an opportunity to jive was on offer!'

'I still have numerous interesting random pieces [Dilwyn] had passed on to Richard, with fitting messages attached.'

'Sorry to hear the passing of Dilwyn.  Sad but not unexpected.  Please give my condolences to his nephew when next in contact.'

'Thanks for letting me know about the sad loss of Dilwyn. He must have been the longest serving member of WHS. I joined in 1971 and he had been secretary for a few years before then. He was a member of numerous societies and made valuable contributions to them all. He often sent me photocopies of articles and pieces of ephemera in which I might be interested, very thoughtful and generous.'

'He was a great supporter of and a regular visitor to our [Barham] Community Library, and of course other local causes.'

'He was a very passionate man and really cared about heritage.' 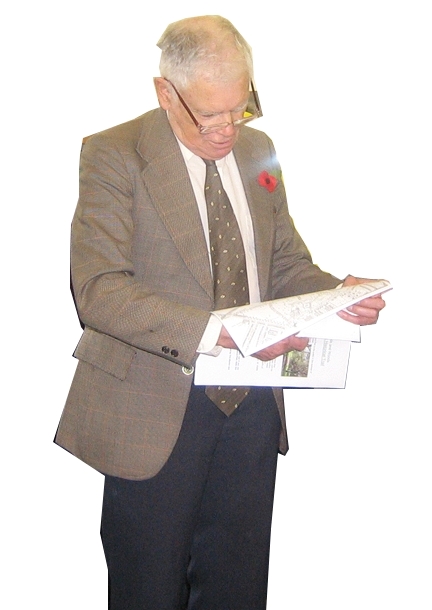 Two more tributes to Dilwyn Chambers from former members of Brent Archives staff (when the Archives were at Cricklewood Library, and at the "old" Willesden Green Library Centre). 'That’s so very sad but I’m glad at the end he was in good care and no doubt regaling his carers with many stories. I’ll remember him fondly. He had an impish nature for sure but he always had the archives' best interests at heart and cared deeply for local history and most of the custodians of it.'and:'Such sad news. Strangely, it’s hard not to think about the good times we had working together (many, many years ago) without thinking about Dilwyn. Dilwyn was and forever will be part of the fabric of Brent Archives, despite the fact he was never an employee! Dilwyn will be missed but never forgotten. May his soul rest in perfect peace.'

FROM LORRAINE KING, EX-BRENT & KILBURN TIMES REPORTER (VIA TWITTER)
I'm saddened by the news that Dilwyn Chambers has died. He was a fierce campaigner who defended locals and made sure their voices were heard. He was a thorn in the side to Brent Council at times which proved he was holding them to account. He will be missed. May he RIP
Posted by Martin Francis at 20:31:00

Dilwyn was a tireless supporter of the campaign to keep our libraries open, and one of the most consistent supporters of Preston Library. He frequently came to our cinema, even though he lived some distance from Preston Road, and was an almost constant presence at our quizzes, parties, talks and other events - all this despite the fact that in recent years he was clearly not in the best of health. He will be greatly missed.
Philip Bromberg
Chair, Preston Community Library

I've received two more tributes to Dilwyn Chambers from former members of Brent Archives staff (when the Archives were at Cricklewood Library, and at the "old" Willesden Green Library Centre).

'That’s so very sad but I’m glad at the end he was in good care and no doubt regaling his carers with many stories.

I’ll remember him fondly. He had an impish nature for sure but he always had the archives' best interests at heart and cared deeply for local history and most of the custodians of it.'

'Such sad news. Strangely, it’s hard not to think about the good times we had working together (many, many years ago) without thinking about Dilwyn.

Dilwyn was and forever will be part of the fabric of Brent Archives, despite the fact he was never an employee! Dilwyn will be missed but never forgotten. May his soul rest in perfect peace.'

Very sorry to hear of Dilwyn's death. I saw him at many meetings and events, and he always had an original take on things. I didn't always agree with him, but he was clearly somebody who thought deeply about local matters, and who was keen to be involved in the life of the community.

I have been in touch with Dilwyn's nephew, in Wales, to pass on some of the tributes above, and these are extracts from his reply, which I hope that those who knew him will appreciate reading:

'It is very thoughtful of you to include all the kind remarks about Uncle Dilwyn.

He was indeed keen on dancing - the only light-footed member of the Chambers family, sadly.

Two places that were dear to Uncle Dilwyn's heart were Wembley/Harrow, which is were he spent his entire adult life, and Tywyn in North wales, where his mother came from and where Talyllyn railway is based. It's gratifying to know that he was so esteemed in his home patch. As you say, Brent council will have very mixed feelings!

My late father, Uncle Dilwyn's senior by ten years, was also very knowledgeable about obscure topics, and the railways in particular. Both of them would argue for hours about such topics as pre-war signalling systems. Both of them were very keen on libraries and actual paper testimony, and the internet age is rapidly pushing such research into obscurity.'

I have to post this anonymously as the tributes to Mr Chambers below were made privately by Brent councillors in email messages between them, but I believe they deserve to be on the public record.

"Always had the greatest respect for Dillwyn, he was one of the best attendees of Brent connect forums and the library. Will miss his hand Written notes."

"His charm, wonderful letters, and knowledge will be missed. His invaluable contribution to Brent Connect will be missed not only by myself who chaired this forum twice but by all who were privileged to be in the presence of such a giant. Thank you Dilwyn - the privilege was mine. RIP"

"I shall certainly miss Dilwyn. He and I used to meet at Brent Connect Forums and more often at ------- when we would stand and talk for ages about all sorts of issues. Dilwyn was very knowledgeable about a wide variety of subjects and had a mischievous humour. A gentleman and scholar. May he rest in peace."

"Dilwyn was a resilient character with strong liberal values. He engaged with local authority and he was a committed historian. He liked to attend public meetings and I enjoyed listening to him [though it] was hard to follow him at times. His presence at Brent connects reminded me of the value of listening to all Brent Citizens and of the social value of connecting with people in a physical sense."

"I am saddened by the news of a nice and friendly and knowledgeable gentleman
that Dilwyn Chambers was. I often had the pleasure of meeting him, in the Queensbury area mainly, and of course all the Brent connect forums. May he rest in peace."

"One of the most likeable and intelligent person I have met. I got to know Dilwyn when I was the Chair of Brent Connect. He was extremely friendly and dedicated to his cause and he always worked to improve and preserve things for the next generation - and that he certainly did with pride and enthusiasm. May his soul rest in peace."

Debbie Nyman writes: I met Dilwyn only twice and once was to buy my book, Tea & Memories. You knew immediately on meeting him that he was a mine of information and probably could have talked all day with him! Very sad when these marvellous characters amongst us, pass away. Unique and irreplaceable.