Barry Gardiner's receipt of funds from Christine Lee and employment of her son was first covered by Wembley Matters 5 years ago when allegations were made by the Times newspaper. At the time Gardiner made the following statement on his website:

“Christine Lee & Co have generously supported my work as a Member of Parliament over many years since we first worked together to fight against plans to redevelop Oriental City and the loss of homes, livelihoods and community ties in Brent. The firm has enabled me to appoint a strong research support team to hold the government to account. This has always been transparently and appropriately recorded in the register of members’ interests. The Times article has revealed nothing that was not already in the public domain and they themselves admit that the secondment of staff was properly declared and state that “there is no suggestion of impropriety”. 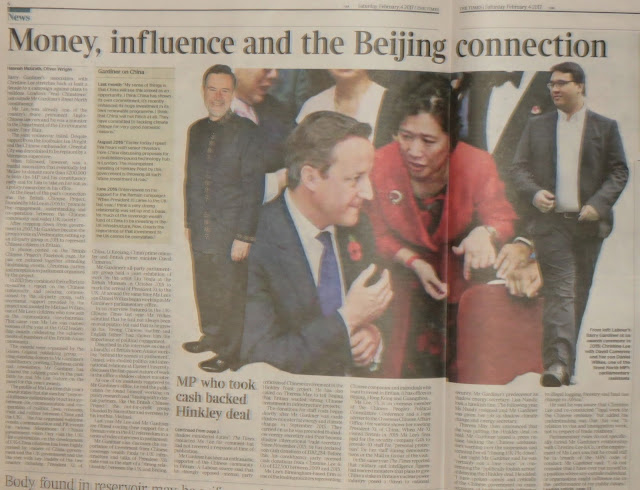 At the time the sum involved was put at £180,000 and 5 years later is said to be c£500,00 between 2015 and 2020 by some accounts. The new circumstances are M15's warning to parliamentarians and the worsening US and UK relationship with China and the clampdown in Hong Kong. Back in 2017 Barry Gardiner was a prominent supporter of Jeremy Corbyn's shadow cabinet and had been praised for his media appearances.

Yesterday's annoncement is of course concerning and raises questions about Gardiner's judgement (as does his friendship with Modi)  but has been seized upon by Tories to help deflect attention from 'partygate' and the government's culpability in the many deaths that would not have happened with better management of the Covid crisis.

In contrast to Boris Johnson, Gardiner appeared on LBC yesterday to answer questions from the presenter Iain Dale and his listeners. I leave it up to readers to make up their own mind when they watch the recordings. Gardiner said he regarded Jennifer Lee as a friend and felt betrayed by her.

Recordings can be found HERE on the LBC website.

It is worth recalling the prescient comment made by Wembley Matters contributor Philip Grant on Barry Gardiner's 2017 statement:

Oh,come on, Barry! You may have declared the "donations" you received from Ms Lee's firm in the register of Members' interests, but the standards of conduct in public life require that:-

'... you should not place yourself in situations where your integrity may be questioned, should not behave improperly and should on all occasions avoid the appearance of such behaviour.'

Ms Lee's firm acts as a legal adviser to the Chinese Embassy / Barry Gardiner MP (recipient of £180k in staff costs from that firm) was a strong supporter of Chinese involvement in the Hinkley Point nuclear power station project. Is that not placing yourself in a situation where your integrity may be questioned?

One of the staff funded by the £180k from Ms Lee's firm was Ms Lee's son, who worked in Barry Gardiner MP's Westminster Office, so presumably has a "pass" enabling him to access parts of Parliament not generally open to the public.

Given Ms Lee's links with the Chinese Embassy, does that not pose a security risk, and again raise doubts over whether our MP has put himself in a situation where his integrity, the appearance of his behaviour, and his judgement, could be called into question?

Will he have the sense to resign - I doubt it. Whilst accepting £500K for his office staff to promote Chinese interest in UK, perhaps he should have used the money to employ staff to work for his office as MP for Brent North and serve the very people who elected him to do so.

Voters should now ditch him at the first opportunity and vote in someone who's loyalties lie with Brent North.

Please do not insult our intelligence by insisting that you knew nothing about this until M15 told you this morning.

I don't believe you. Think about it? who on earth accepts half a million pounds to help with staffing costs and thinks that they don't have to produce some sort of results as pay back! It's called Bribery where I live.

Anon at 12.55 At least in part it does appear that the money was used to employ a staff member in his parliamentary office - the son of the donator. Gardiner says that the son had been volunteering in his office and was recruited through a fair procedure.

Martin - what does 'staff' mean. How many members of the Gardiner family worked in Parliament for him or other MPs? His wife was on his payroll at a very generous salary. At least one of his sons worked for another Labour MP (you scratch my back and I'll scratch yours). It is not as if the Gardiner family was not rich enough that they had to accept donations (with no questions asked) and as Jaine Lunn says you would have to be very stupid to think that someone will give you £500,000 and not expect something in return. Effectively most of the money ended up in the family coffers.

There are plenty of other issues to challenge Barry Gardiner's integrity on:

1. He was elected on the promise of "24 hours to save the NHS" and claimed that he would save Edgware Hospital. Labour WON and the Hospital still closed.

2. He was the Brent mouthpiece for Tony Blair on the Iraq War trying to convince Brent residents that they were under threat from Saddam Hussein's secret weapons. He lied - just like his Labour Leader - and many innocent people died as a result.

3. His record during the Expenses Scandal was not great either with Harrods (rather than local shops) he was buying from.

4. In 1997 He attacked Rhodes Boyson, the sitting Conservative MP, for not being local and promised to move to Brent if he won. It took over a decade before he finally did so staying in his million pound mansion in the country for years.

Imagine employing her son in his office thrn claiming he has not been influenced in his decision making by the money.

How long did he stay living in brent and did his family live there or is it a second home?

Not sure but initially when his home was outside Brent the word was that he did not want his children to attend Brent schools.

Barry Gardiner's home was in Cambridge (where I believe he had been a Labour councillor) when he stood for parliament in Brent North in 1997.

Once elected, he and his family moved to Chorleywood. When challenged as to why he had not come to live in Brent, he said that he had never promised to do so.

I knew that was not correct, because I had been at an election hustings meeting, at Holy Innocents' Church Hall in Kingsbury, when he made that promise!

He may well have made the promise "in good faith" at the time, but I understand (though I have no proof) that it was his wife who insisted that their children should not go to schools in Brent.

Despite Chorleywood being on the Metropolitan Line, with some "fast" services into Central London, Barry Gardiner rented a flat close to the House of Commons, which he could use in case parliamentary business kept him there too late to go home. This led to some criticism of his MP's expenses claims!

By comparison, Brent East Lib Dem MP, Sarah Teather, moved to a home just off of the High Road in Willesden when she was elected in 2003. She commuted into work on the Jubilee Line, straight to "the office" in Westminster.

Barry Gardiner could have had a comfortable family home in the Wembley Park / Barn Hill area, and commuted from the local station in the same way. He chose not to do so. I'm not sure when he moved home to Wembley, but it was almost certainly after all his children had finished their schooling.

On the wider question of receiving such large sums of money from a Chinese lawyer, that does raise very serious questions about Barry Gardiner's judgement. I believe that this may be looked at by the Parliamentary Standards Commissioner, so we should await the report on that!

If wrongdoing is found, he should follow Owen Patterson out of Parliament, but even if he stays an MP, he should certainly step down at the next General Election. [I'm sure there are members of Brent's Cabinet who would love to "inherit" Brent North!]

I'm bemused as to why Ms Lee saw fit to give half a million pounds to one relatively lowly MP, who wasn't even in government. I can't help feeling there's much more to this than meets the eye.