2022 is the year which provides an excellent opportunity to get more of the Bobby Moore Bridge tile mural scenes back on permanent public display. I’ve launched my campaign to get the murals on the walls of Olympic Way, just outside the subway from Wembley Park Station, returned to public view. On 1 January I sent an open letter to Quintain’s Chief Executive Officer, which I’ve set out in full at the end of this article. 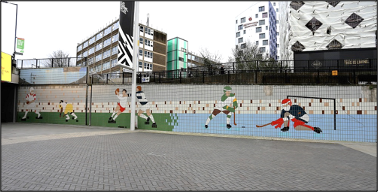 Full details of the Bobby Moore Bridge tile murals can be found in an illustrated article I wrote for Brent Archives. The murals were covered over with vinyl advertising sheets in the autumn of 2013, under a deal between Brent Council officers and Quintain. Wembley History Society campaigned in 2018 to have all of the murals put back on permanent public display. Quintain’s response in 2019 was to do this for just the central mural scene on the east wall of the subway, showing England footballers at the old “twin towers” stadium.

I had hoped I could persuade Brent’s Cabinet not to allow the murals in the subway to remain covered over, when Quintain’s Bobby Moore Bridge advertising lease came up for renewal in August 2021. However, in January last year I discovered that the lease had secretly been extended to August 2024 by Council officers, under a very dodgy deal in 2019. 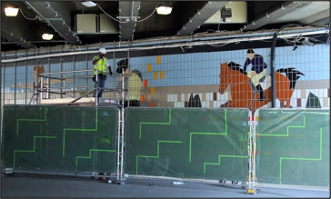 Quintain contractors fixing advertising screens over some of the subway murals in July 2019.

Unfortunately, that lease extension means that it won’t be possible for the rest of the mural scenes, on both sides of the subway, to be seen again in time for the centenary of Wembley Stadium’s opening (for the F.A. Cup final in 1923). The only “good thing” in the extended lease was that Quintain agreed to allow Brent to request that the Olympic Way murals be put on display for up to 21 days a year. In fact, they were put on display for a full five weeks (wow!) at the start of Brent’s year as London Borough of Culture 2020.

Now, I’m asking Quintain to “do the right thing”, and not to apply to extend their advertisement consent for the Olympic Way tile murals. I hope that they will respond positively, but if they don’t, I will be just one of many local people who fight their application all the way. I am confident that, if it comes to that, our objections should succeed in stopping the renewal of a consent which Brent’s planners should never have given in the first place.

This is my open letter:

This is an open letter

Happy New Year! Quintain and its Wembley Park subsidiary have an important decision to make in 2022, and I am writing, as a member of Wembley History Society, to encourage you and your colleagues to make the right one.

The heritage tile murals at Olympic Way, celebrating sports and entertainment events at Wembley Stadium and Arena, have been covered over with Quintain’s vinyl advertising sheets for most of the time since the autumn of 2013.

In September 2013, Quintain applied for advertisement consent for a period of five years. Brent’s Planning department did not deal with that application until August 2017, and gave consent for five years from then. Although there was a later advertisement consent in 2019 for the Bobby Moore Bridge subway and parapets, the consent for the tiled walls in Olympic Way expires on 25 August 2022. I hope you will decide not to apply to renew that consent.

When Quintain first entered into a deal with Brent Council officers in 2013, over advertising at the Bobby Moore Bridge and on the walls of Olympic Way to the south of the subway from Wembley Park Station, the London Designer Outlet was just about to open. I can understand why your company then wished to use this “gateway” to its new Wembley Park developments to promote the LDO, and later its Tipi rental flats, Alto apartments and Boxpark joint venture.

However, the LDO and Quintain’s other Wembley Park developments are now well established and widely known. There is no need for your company to put large advertisements on the walls of Olympic Way to publicise them, especially as you now have larger LED advertising screens on the parapets of Bobby Moore Bridge, and large banner advertising on the new lamp posts along Olympic Way.

That alone would be a good reason not to apply for consent to continue displaying advertisements over the tile murals in Olympic Way. But an even stronger reason is that these murals are part of a public artwork, designed to celebrate an important part of Wembley Park’s history, something which adds to the area’s “sense of place” for residents and visitors.

Quintain and Brent Council may not have realised the cultural and heritage importance of these tile mural scenes in 2013, but that is not the case now. I was one of the Wembley History Society representatives invited to the Mayor of Brent’s “reveal” of the Olympic Way tile murals, at the start of Brent’s year as London Borough of Culture in January 2020. Brent’s publicity for that event said of ‘the heritage tiles at Wembley Park’s Bobby Moore Bridge’:

‘The tiles, which show scenes from famous sports and entertainment events at Wembley Stadium and the SSE Arena, Wembley, are part of Brent’s rich heritage and date back to September 1993 when they were originally dedicated to the legendary footballer.’ 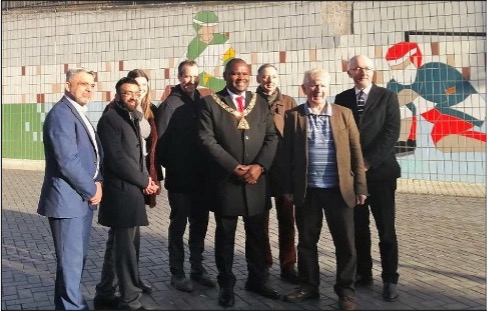 Julian Tollast, speaking on behalf of Quintain at the “reveal” event (above), said:

‘The iconic cultural and sporting events at Wembley are celebrated in these heritage tiles behind us, and we are really proud to work with Brent and with Wembley History Society to make the reveal on a periodic basis of these murals possible.'

Quintain / Wembley Park’s respect for the heritage value of these tile murals was also shown, in the welcome repair of damage caused by water ingress behind the tiles, in March 2021.

I hope you will agree that the time has come for these heritage assets to be put back on public display, not just ‘on a periodic basis’, but permanently. Advertisement consent to cover the American Football, Rugby League and Ice Hockey mural scenes on the east wall, and the drummer image remnant of the Stadium Concerts scene on the west side of Olympic Way, expires in August 2022. However, if the advertising could be removed before then, in time for the Women’s Euros football final on 31 July, or the summer music concerts (such as those by Ed Sheeran in late June), so much the better. That would allow tens of thousands more visitors to Wembley Park to enjoy them.

I look forward to hearing from you that Quintain / Wembley Park will not be seeking to extend its advertising consent for the tiled mural walls on Olympic Way.

Thanks for your comment, and your efforts over getting the murals back on display since 2019.

I am hopeful, too. My letter sets out very good reasons why Quintain should agree to put these Olympic Way murals back on show. But we will have to wait and see how they respond.

Thank you for your question. The answer, in a word, would be "money".

As well as displaying their own advertisements for most of the time, Quintain can sell the advertising space on the walls of Olympic Way during special events at Wembley Stadium. That is usually to display promotional material for event sponsors, such as the Emirates airline when the F.A. Cup Final takes place.

Luckily, if Quintain were to apply to renew consent, so that they could carry on displaying adverts over these mural scenes after August this year, the special planning regulations for advertisement consent would not be on their side.

These say that: 'A local planning authority shall exercise its powers under these Regulations in the interests of amenity* ....'

The powers which Brent Council has, if dealing with any application, are NOT to be exercised in the interests of profit!

*[This is what the regulations say about amenity: 'factors relevant to amenity include the general characteristics of the locality, including the presence of any feature of historic, architectural, cultural or similar interest.'

The heritage tile murals in Olympic Way ARE a feature of historic, architectural and cultural interest!]

'Thank you for your email and letter dated 1st January 2022 concerning the tiles and vinyl coverings on the abutment walls to the south of Bobby Moore Bridge.

Please accept our apologies for the delay in replying. We have been giving your comments careful consideration as a team at Quintain/Wembley Park and need to have further discussions with other Stakeholders.

We will get back to you with our response in the next few weeks.'