UPDATED WITH COMMENT: (Some of) Wembley Park’s sporting heritage uncovered 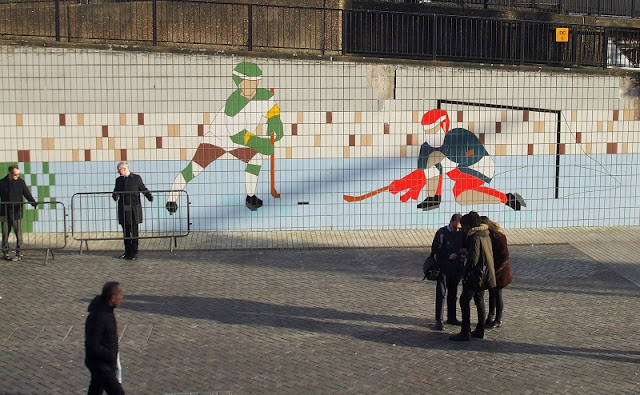 Quintain representatives remove barriers in front of the Ice Hockey mural, while Brent Communications team discuss plans for the photo shoot, ahead of the “reveal” of three tile mural scenes on 18 January.

It may be hard to believe, after the battle I was involved in with Quintain and Brent Council’s planners six months ago LINK , but last Saturday afternoon I was celebrating the “reveal” of three of the Bobby Moore Bridge tile mural scenes with Brent’s Mayor, Council Leader and Lead Member for Culture, and representatives from Quintain!

Back in November, I had written to Josh McNorton, of Quintain’s Wembley Park Arts organisation, to try to get at least some of the tile murals put back on public display during this London Borough of Culture year LINK. Now, the Council and Wembley Park are making it part of their LBOC 2020 offering.

I was one of two members of Wembley History Society invited by Brent to take part in the event, and we were warmly welcomed by Cllr. Ernest Ezeajughi and his Council colleagues. After lots of photographs (for both the Council and Wembley Park) short speeches were filmed from the Mayor, Julian Tollast of Quintain and W.H.S. Chair Jim Moher, to be used in Brent’s LBOC social media.

I was then asked if I would be willing to “speak to camera” about why the murals were there and what they showed. It was an opportunity I felt that I had to take, but in case what was recorded does not make it beyond the editing stage, I will give some more information about the parts of Wembley’s sporting heritage shown by the three mural scenes which will be on show, but only until 24th February.

The Ice Hockey mural can be seen in the first image above. The Empire Pool (now Wembley Arena) opened in 1934, providing a large public swimming pool in summer which could be covered over for other events, especially ice hockey and public ice skating through the winter months. From October that year, two teams used the ice hockey rink, the Wembley Lions and the Wembley Monarchs (originally known as the Wembley Canadians, they retained the maple leaf as their badge). The Wembley Lions were national ice hockey league champions in 1936, 1937, 1952 and 1957, and played their last match in 1968. 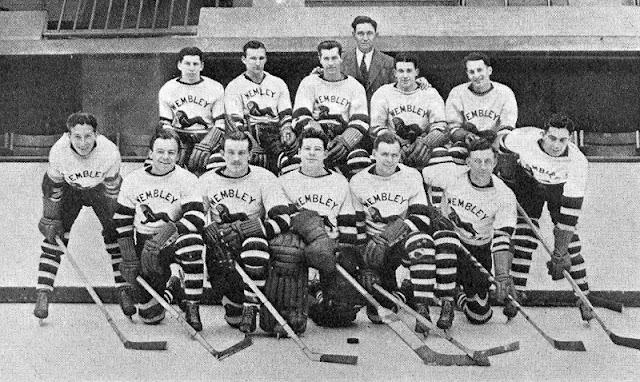 The middle of the three mural scenes, on the east wall of Olympic Way just as you come out from the Bobby Moore Bridge subway, celebrates Rugby League. I can’t help wondering whether the large pillar, installed by Quintain for lighting and adverts, would have been moved somewhere else if the tile murals had not been covered with vinyl advertising sheets when it was put in place! 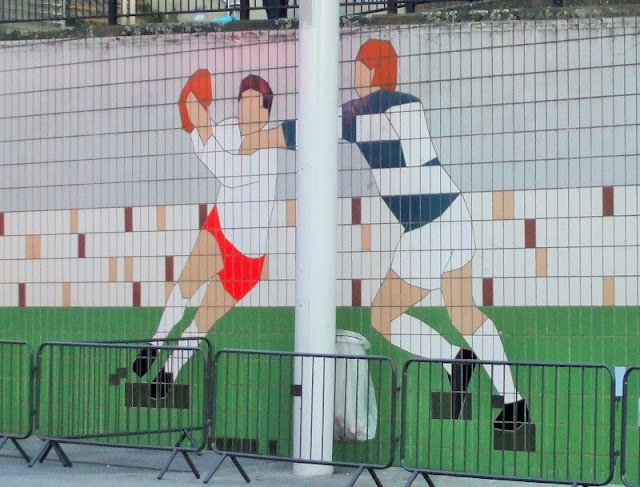 The Rugby League mural, as it is now.

The Rugby League Challenge Cup Final used to be played at one of a number of club grounds in the north of England, but by the late 1920’s a larger venue was needed for the event. Arthur Elvin, whose company had saved Wembley Stadium by buying it from the British Empire Exhibition’s liquidator, put on a good show for the 1928 F.A. Cup Final, with a marching band and community singing. Even though their team lost, the Huddersfield Town football fans went home very happy with their outing, which lead the Rugby League to give Wembley a try [no pun intended?] for their final in May 1929. 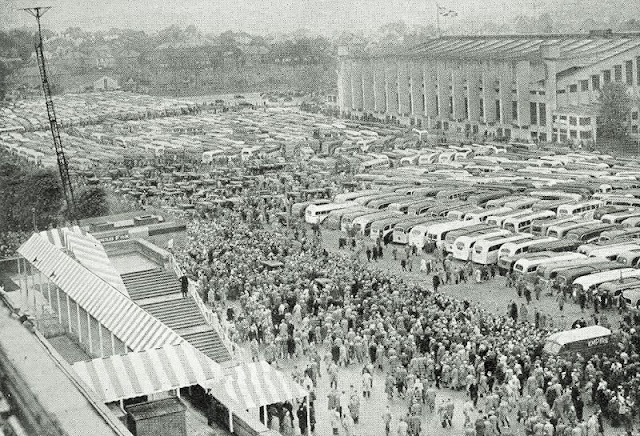 Crowds outside Wembley Stadium at the 1948 Challenge Cup Final.

Since then, apart from 1940-45 (because of the Second World War) and 2000-2006 (when the stadium was being rebuilt), the Challenge Cup Final has been played at Wembley every year, providing the sport's annual "big day out" at the National Stadium. The BBC first televised the match live in 1948, and that still continues as well, so that Rugby League has been part of our local sporting heritage for over 90 years. 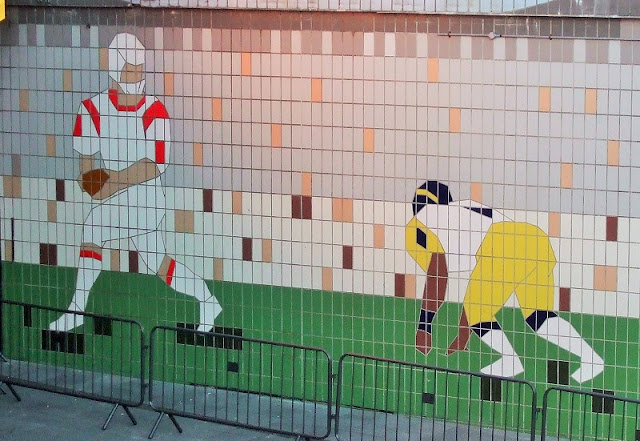 American Football’s history at Wembley does not go back quite as far. The first NFL game at the Stadium was played in 1983, but the first American Football match there took place 40 years earlier, during the Second World War. It was probably between teams representing the U.S. Air Force and U.S. ground forces who were stationed in England, in preparation for the invasion of Europe in 1944. I wrote about this in a "guest blog" article in 2017 LINK .

Please go and see these tile mural scenes if you can, take photographs and share them on social media. These vivid mural pictures, made entirely from oblong ceramic tiles, are part of a public work of art that celebrates Wembley Park’s rich sporting heritage. In putting these mural scenes on show, as part of the Brent’s LBOC 2020 events, the Council has finally acknowledged their cultural importance. I hope that they won’t forget that, next time a decision has to be made about whether the murals should continue to be covered over with adverts.

(No doubt someone will remind them, should it slip their memory.)