The strength of feeling amongst residents over the protection of the borough's street trees was evident yesterday evening when there was standing room only at the newly formed Brent Trees public meeting of residents, council officials and councillors. The Cabinet lead member for environment, Cllr Krupa Sheth, was unable to attend.

There were three very professional presentations from members of Brent Trees campaigns with space for a response from the Council after each one. Most responses came from officers, Chris Whyte (Environment), Tony Kennedy (Highways) and Gary Rimmer (Principal Trees Officer).  Cllr Butt only spoke when a member of the audience pointed out that many of the questions were about Council policy and should be answered by politicians who make policy rather than officers. 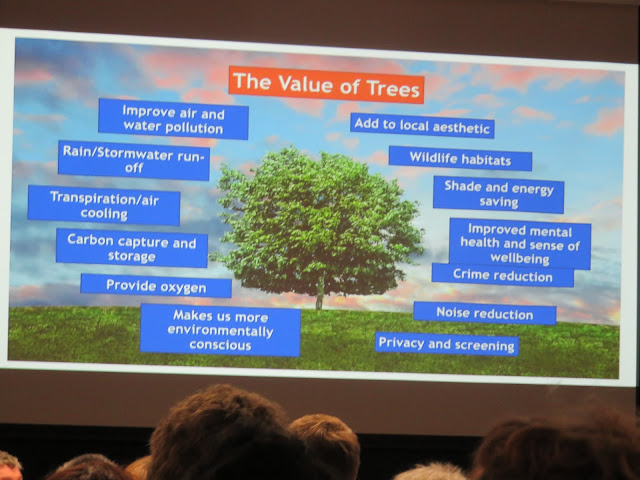 The first presentation was about the value of trees and why there needed to be significant reasons for removal. A slide was shown of the trees outside Furness Primary School and the adjacent footway, damage to which had been cited as a reason for removal. There was laughter when the presenter said, 'By Brent standards that is a pretty good pathway.'  Campaigners had managed to save some of the trees from removal.The Council was criticised for not giving sufficient, evidence based reasons for removal, and proper notice to residents who might wish to make representations.  The conclusion was that Brent Council did not value its trees and saw trees as a cost and not a benefit.

CAVAT (Capital Assessment Valuation of Amenity Trees) in Sheffield has valued each mature tree at £25,446. It would take 20-30 years for replacement trees to give the same benefit. It need 26 young trees to replace the benefit of one mature tree.


Brent Trees wanted an Action Plan on the maintenance of mature trees to reduce the need for removal:
Officers responded that dead, diseased and dangerous trees had to be removed, insurance claims had to be avoided, and solutions had to be found for trees that created obstacles for pedestrians. A campaigner said that the issue was more complex than simply chopping trees down to make pavements safer. Engineering solutions needed to be found.

A second presentation focused on poor communication by the council in the form of notices and the need for reasons for removal to be clearly stated and sufficient notice given.  DEFRA had set out a Duty to Consult and a Duty to Report: 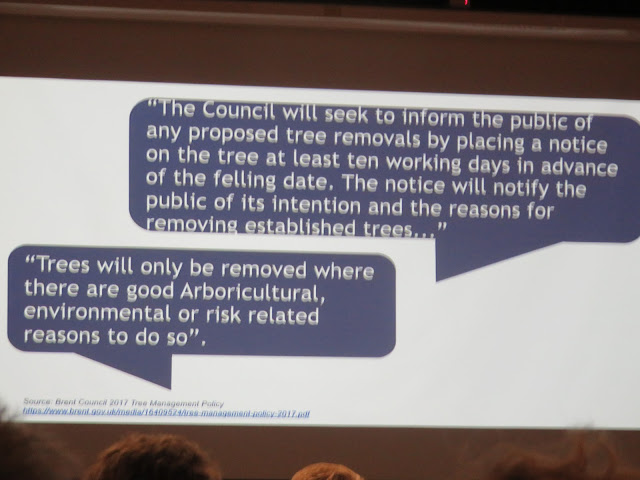 The Council needed to use the full range of social media available to it to develop a clear communications strategy to inform the public. Notices should state whether a new tree would be substituted for a removed tree and, if so, the type of tree that would be planted in its place, 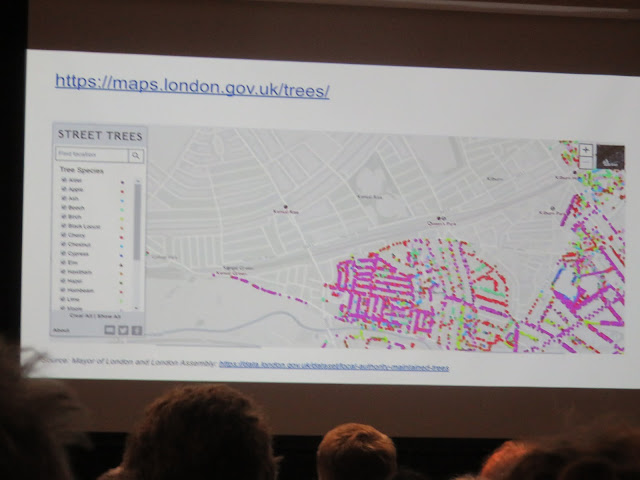 A traffic light monitoring system for trees was suggested:

Chris Whtye of the Environment Department said  that they had not entered a debate with the public but made a judgement themselves on individual trees. Independent consultation on every tree was not practical but if the government made  it a requirement the Council would have to comply. A traffic light system was more than the council could provide. He admitted a lack of quality in the information that the council had been provided and there needed to be a clear description of the logic for removal.  He recognised that there were gaps in information but that it was positive that Brent Trees had been set up and had entered into dialogue with the Council.

Members of the audience gave examples of trees removed without good reason in various parts of the borough as well as Old Paddington Cemetery. Data via i-tree (LINK) should record not just the number of trees but the size of the canopy and other information.  Chris Whyte said that a larger canopy meant more uptake of water with a shrinkage impact on clay soils.

An audience member was cheered when he condemned the officers' claim that because records did not have to be kept that they weren't. He said flatly, 'I don't trust you to make decisions on what is a healthy tree.'

The last presentation was on the lack of resources provided for trees in Brent. Similar boroughs such as Hackney and Islingtton were better staffed. The highest number of tree officers in London boroughs was 7, the average 3.38 and the lowest (one) was Brent. 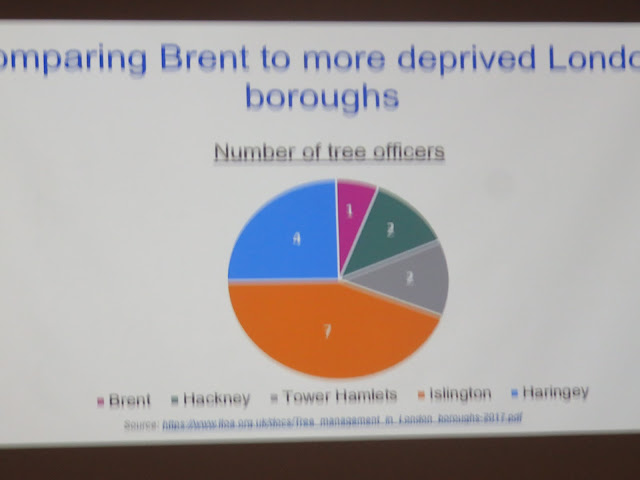 Given the Declaration of a Climate Emergency by the Council, trees needed to be given a higher priority. The lack of resources devoted to trees indicated the low priority currently given to this vital issue by the Council.

Cllr Butt claimed that Islington and Hackney were not comparable to Brent and had a higher council tax revenue base while an officer said that more people were involved with trees in Brent than indicated by the quoted figures.

Cllr Butt said that because of government cuts to Brent's funding the council had to prioritise areas such as adult social care.  He urged the public to take part in the current budget consultation to put their views.

He responded angrily when I pointed out the c£18m that had been earmarked to be spent on the replacement of the Wembley Stadium pedway by steps and the huge underspend in the 2017-18 Community Infrastructure Levy. The 2018-19 report should have been published by December 31st but is not yet available.

Cllr Butt said that the pedway removal was a planning obligation and that it was up to the public to make applications for Neighbourhood CIL.

After the meeting Brent Trees issued the following press release:

Following a public meeting on January 15th, the BRENT TREES group is satisfied that the council has taken a step in the right direction but asks for a budget commitment on a par with the climate emergency.

With a turnout of more than 100 people, the event we organised at Newman Catholiv College on Wednesday showed the depth of concern felt by Brent residents regarding the maintenance of street trees by the council, particularly in light of the council’s own declaration of a climate emergency.
We heard many stories from the audience, echoing our own experiences. Last November, the council tried to remove 11 trees on Furness Road in Kensal Green, even though residents had not been given proper notice and most of the trees were healthy. That incident caused a storm among the local community and resulted in the creation of the Brent Trees group.

On Wednesday, ​Chris Whyte, ​Operational Director, Environmental Services, Regeneration and Environment, Brent Council,​ ​welcomed the formation of our group. ​“W e need to enter a constant dialogue with you to get back onto a better footing​”​, he declared during the course of the public event.

Mr. Whyte also stated that the council will adopt ​“much clearer communication” with residents ahead of any planned felling of trees by the council.

Gary Rimmer, who is Brent’s sole Street Tree Officer, informed those attending that in future ​“a different sign will go on trees” recognising that the information displayed in Furness Road last November was inadequate.

We welcome the willingness shown by both Chris Whyte and Gary Rimmer as well as the leader of the council, Councillor Muhammed Butt - who was also present at the meeting - to improve communication with residents.

We expect that the promises made at the meeting will be confirmed to us in writing and are hopeful that a way of working will quickly be established. ​We want to avoid any further removals of healthy trees as was the overall intention in Furness Road likewise ​thetaking down of a 150 YEAR-OLD tree in Paddington Old Cemetery​ which happened last November.

However, we are deeply concerned at the lack of resources dedicated to trees by Brent council and believe, having declared a climate emergency, this is a serious oversight that needs to be rectified. Brent has just one Street Tree Officer​. When we compare the number of street tree officers employed by other London boroughs with a similar socio-economic deprivation profile it is clearly too low. Haringey employs 4 street tree officers ; Tower Hamlets has 2.

The BRENT TREES group will use ​the ongoing budget consultation to repeat our request for the allocation of more resources to street tree care. We believe the climate emergency declaration adopted by Brent council last July compels Brent to take bold budget decisions.

We are aware of the extraordinary impact of the austerity driven cuts imposed on the council by central government since 2010. Nevertheless, the climate emergency is so serious we have no choice but to raise the environment protection bar to an unprecedented level.

We believe this can be achieved in Brent if both residents and the council take inspiration from other local authorities in London and across the UK, emulating best practice. We simply have no other choice.

For any questions, please email us at: