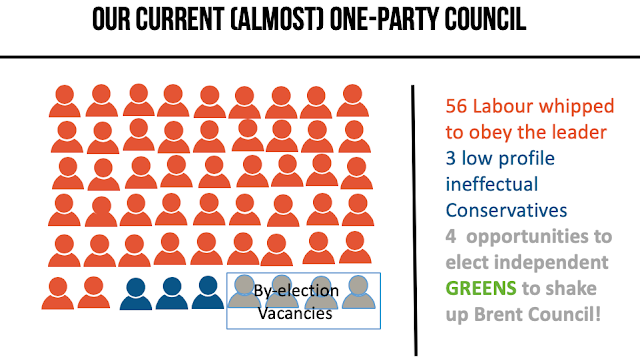 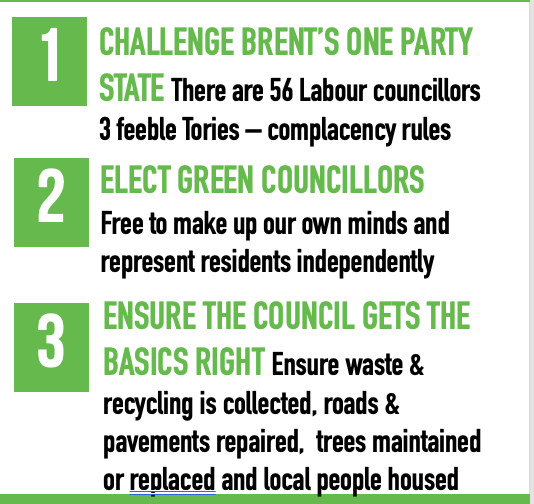 To borrow from Shakespeare, 'There is something rotten in the state of Brent', a fact confirmed to residents and campaign groups when they encounter the reality of the Labour Council's intractability whether on the closure of Strathcona school, regeneration projects , bulk waste chargesor the cutting down of street trees.

The Council is well entrenched with a massive majority which is reinforced by a structure that centralises power in a small group of councillors in the Cabinet and General Purposes Committee. The personnel are almost identical: 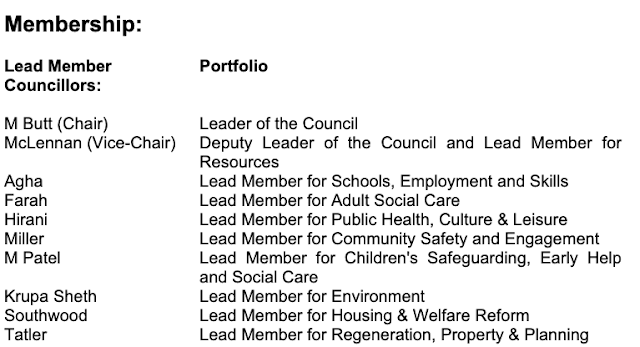 The Cabinet are all Labour and there is just one opposition member on the General Purposes Committee. Similarly there is only one Conservative member on the Planning Committee. Membership of committees reflects the proportion of seats won by the parties in the Council elections but I would argue that the Conservatives have failed to offer any rigorous challenge in their diminished role as the official opposition.

So what about some rigorous scrutiny of the Cabinet cabal's decisions by Labour backbenchers (up until the recent resignations there were 52 non-Cabinet members)? Well many have positions on various committees which attracts additional allowances and that may limit any public criticism, but those who do raise their voices find themselves at the mercy of the Labour Whip and the ire of Cllr Butt, the Labour leader.

Wembley Matters has covered Duffy's raising of issues such as asbestos in Paddington Cemetery, deficiencies in the Veolia waste contract and the Kingdom littering contract. He had the Labour whip removed and was not selected for the last Council election. LINK LINK

Cllr Zaffar van Kalwala fell out with Cllr Butt over personal issues but also over his championing of Stonebridge Adventure Playground which Butt succeeded in closing to the lasting detriment of the local community. There were allegations that Butt engineered the moving of a Full Council meeting  date to trap Kalwala via the non-attendance rules. Kalwala did not stand at the last Council election. LINK

Cllr Abdi Abdirazak fought back, without success, when Cllr Butt allegedly removed him from the Planning Committee for not voting for the planning application for a new Ark primary academy on the York House site in Wembley LINK

Cllr Sarah Marquis announced she would not stand again as  chair of Planning Committee after she had exercised her independence on several applications including voting against the Twin Towers on the Chesterfield House site and rigorously questioned planners over affordable housing. LINK
Marquis has resigned from the Council citing family reasons.

Cllr Michael Pavey eventually resigned from the Brent Cabinet saying he did not share Butt's approach to running the Council but had angered the leader over his support for a rise in Council Tax and the sanitising of his report into racism in Brent's Human Relations department. LINK LINK He has also resigned for family reasons.

Cllr Jumbo Chan currently stands out as a Labour councillor willing to question Council policy, most notably over academisation and the Strathcona closure but also more recently over street tree policy. Veteran councillor Janice Long also has her moments but has lost influence with the subsuming of what had been a separate Housing Scrutiny Committee, which she chaired, into a main Scrutiny Committee.

The two Scrutiny Committees do some useful working, particularly in task groups, but are handicapped when it comes to Cabinet decisions. They have the power to call-in such decisions and can make recommendations but these go back to the Cabinet which decides whether to accept them or not.

The Cabinet system centralises power in the hands of just 10 councillors, gives considerable power via appointments to the leader; diminishes the role of the backbencher in questioning decisions via the whipping system and limits them to mainly dealing with casework as the go-between between residents and council departments.  Councillors who disagree with decisions are reduced to deliberately  missing Full Council meetings or popping to the lavatory when key votes are taken so as not to be on record as defying the whip.

Something 'rotten'  indeed. In the absence of an effective opposition this blog has attempted to inform the public on some of the issues including fake consultations, too close relationship between the leader of the Council and developers and the scandalous decision to, in essence, return £15.8m Community Infrastructure Levy monies back to  Quintain for 'improvements' to Olympic Way including the cosmetic replacement of the Pedway by steps.

Some councils are rejecting the Cabinet system as undemocratic and returning to a modified form of the Committee system, often maintaining one or more Scrutiny Committees, which actively involves many more councillors in local government and this could be a medium term aim for Brent. Some form of proportional representation in local government in the longer term would ensure a wider spread of councillors and a broader democratic representation.

Meanwhile for an effective opposition unhampered by a whipping system and the leader's patronage I urge you to vote Green if you happen to be in one of the affected wards:

Although I am not a member or supporter of any political party, Martin and the Brent Green Party have made a very strong case in the blog above.

Brent Council certainly does need councillors who are willing to raise the genuine concerns of local residents about the way those in power are running the borough, and to ensure that the Leader and his Cabinet are challenged over their proposals, and held to account for their decisions.

The point about the Cabinet and General Purposes Committee both being run by the same councillors, rather than there being a "separation of powers", as was originally the case when the Executive / Cabinet system was introduced in Brent, is something I raised in a "guest post" in October 2016 "Does Cllr. Butt have too much power?".

If you are interested, you can find the "blog", and some comments on it, at:
https://wembleymatters.blogspot.com/2016/10/does-councillor-butt-have-too-much-power.html