Cllr Tariq Dar tweeted details of the new Brent Council Cabinet earlier this morning. (Note the Tweet appears to have been deleted later this morning so perhaps it was premature, inaccurate  or unauthorised so please take this into account when reading below)

The Cabinet has been expanded to 10 members 8 of whom are appointed by Council Leader Muhammed Butt.  Leader and Deputy Leader are elected positions although only the deputy position was contested this year. Muhammed Butt could be leader until 2026.

There are some role swaps in the new Cabinet as well as newcomers including Dr Gwen Grahi who replaces Cllr Thomas Stephens at Children, Young People and Schools following  his defeat at the local election. All members of the outgoing Cabinet who retained seats at the local election continue, albeit soemtimes in different roles.

Some of the portfolios have been expanded. Shama Tatler, holds on to Regeneration and Planning, a role in which she has been criticised as far too 'pro-developer.' Krupa Sheth retains Environment with the addition of Infrastructure. It remains to be seen how that works alongside Regeneration and Planning. Promise Knight's new role at housing will be challenging given controversies over the amount of truly affordable housing being built as well as the quality of housing and threats to green space from 'fill-in' plans on estates.

It is noteworthy that the gender split is now 7 women to 3 men.

The proposals are ratified at the Council AGM.

I presume Mili Patel will take on Safeguarding, Early Help and Social Care. From Dar's tweet it is unclear who will be responsible for Finance/Corporate. 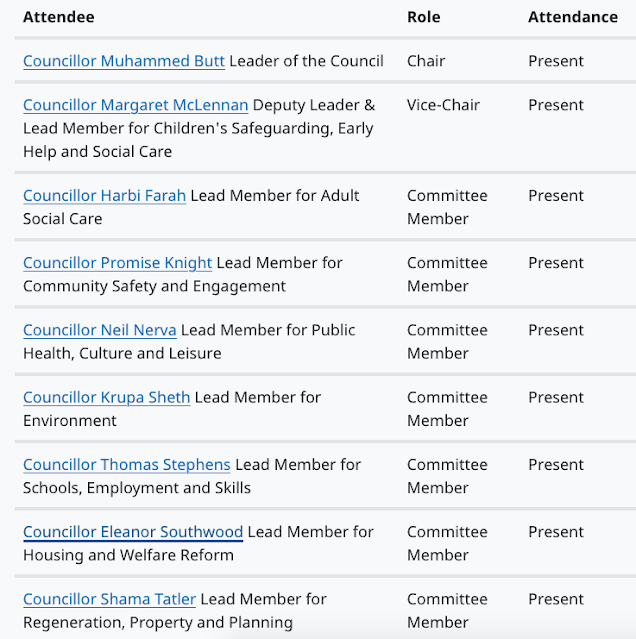 The Levelling-up and Regeneration Bill is in Parliament. The 328 page Bill itself is in dense legal language for developer colonial, but there is also a further information policy paper published 11th May?

This policy paper talks about "devolving powers to those who want them" and even the idea of Local "Governors", so plenty of red meat for Brent's Cabinet.

Also in ambiguity it states that "reducing spatial disparities is at the heart of government decision making." Really, how does that fit with Brent's 8+ Growth Areas of mega density housing zones with housing as the only infrastructure to 2041?

Looks like he had to scrape the barrel there. You,ve got to feel sorry for Brent going forward.

Local Plans will need to be updated every 5 years, so could Brent's from National Planning Policy Framework divorced and brutal zoned risk filled Local Plan 2022, become a 'sound,' inclusive and safeguarding of all Brent residents new Local Plan by as early as 2027?

Especially so given that "Reducing spatial disparities is at the heart of government decision making" already- pandemics, wars, climate crisis, mass impoverishment look like doing for structured and baked-in inequalities London zoned.

A little bird has just told me: a candidate who was rejected by all Labour Party Wards in Brent gets the opportunity to be a councillor candidate as the last resort because the candidate she replaced was suspended by the Labour Party and there were no other potential candidates available. That 100% rejected candidate then gets on Brent's Cabinet, you've got to be kidding us? One would ask, what has she done, and will do for Butt?

Any news about the new Scrutiny Chairs...?