The Buttocracy continues in Brent - albeit slightly dented 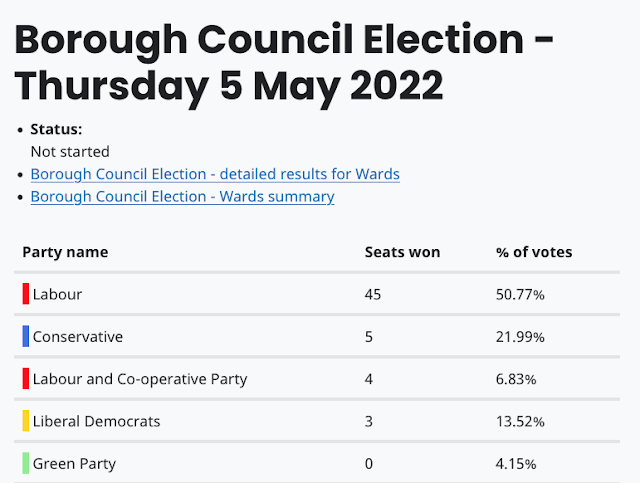 Labour won 86% of the 57 Council seats on just 51% of the votes last night adding to the case for a proportional voting system.

However, the opposition doubled with 5 Conservatives elected (Kenton 3 and Queensbury 2) and Paul Lorber performing a convincing 'Come Back Kid' routine for the Liberal Democrats in Sudbury where Cabiner member Thomas Stephens was defeated, to join Anton Georgiou and his running mate in Alperton.

There had been plenty of nail biting during the final stage of the count when 'mixed votes' are laboriously recorded on tally sheets. These are votes where people give a vote to different parties (sometimes one for each!) rather than vote a party slate.

The Liberal Democrats will now qualify as a party group and like the Conservatives be entitled to seats on some committees although Labour will still have a hefty majority.

Although winning none of the 16 wards in which it stood a single candidate the Greens performed quite strongly in line with the national picture becoming the second or third party in some wards with a total of 7,580 votes. Their highest percentage votes were in Brondesbury Park, Cricklewood and Mapesbury, Willesden Green, Kilburn and Queens Park.

Attention will now turn to the Labour AGM where the new Labour Group will elect the deputy leader and chairs of the two Scrutiny Committees. Cllr Butt will exercise his patronage in other positions including Cabinet and the important Planning Committee.

The Labour Group AGM takes place on Saturday May 14th. The recommendations then will be rubber-stamped at the Council AGM on May 18th (5pm)  along with committee membership, the leadership of the opposition groups and the installation of a new Mayor, widely tipped to be Cllr Tariq Dar.

Conservatives and Liberal Democrats will also be electing their new Group leaders.

Detailed results on a ward by ward basis can be found on the Brent Council website:  LINK

Well done Paul. Not only won a seat from Labour, but from a Labour Cabinet member!!!

Unfortunately that's what happens when people don't come out to vote. Simple system - get out to vote and the majority wins. If not enough come out for a candidate or party, then the result will be as is. Too many instances of people not being bothered to come out to vote and then complain when their favoured party/candidate not selected or moan when their problems can't be solved. People need to take some ownership and responsibility and not complain all the time.

For Scrutiny to be effective in Brent the Chairs of the two Scrutiny Committees should be elected by a secret ballot and ideally come from the opposition parties. There should also be "pre-Scrutiny" (proposed decisions reviewed and challenged before they are made) rather than made first then requiring a call in when it is too late.

Did you know that Scrutiny can only advise? Cabinet can do what they want, and as Cabinet is actually Butt and Downs we have a crap Borough.

If properly run Scrutiny could make a positive contribution - especially if Scrutiny was done prior to Cabinet made a decision. It might also help if all the Chairpersons of Scrutiny were NOT automatically Labour Councillors.

Now on the theme of xxxxcracy , it is worrying that in some Wards, Labour candidates were selected on the basis of "num-member-o-cracy"...the Ward is filled by family members or cronies or both of individuals who can not even understand "socialism" and its importance on citizens' quality of life, who see a Council seat as ego-boosting. The result is a mal-functioning Labour Group replete with psychophancy...the Leader has a grip.

It's what the global unaccounted for wealth parallel economy demands, but where does this take equalities between taxpayers and social democracy- becoming either zoned in protected or excluded by overdevelopment mono-design zones from UK life, social quality, safeguarding, wellbeing, health, environmental and resilience investment spaces?

Don't worry David - Michael Gove has just promised to do away with shoddy new housing and make sure that we have all the social infrastructure we need for decent living.

We will only believe it when we see it!!!