Full details of Cabinet, Committee chairs and Committee members in the new Brent Council adminstration should be released later today before the Council Annual General Meeting takes place at 5pm. You can view the meeting HERE.

Meanwhile following the election of 5 Conservative and 3 Liberal Democrats the allocation of seats has been agreed and  published on the agenda.  These are: 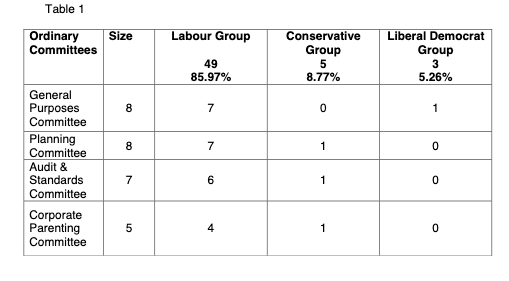 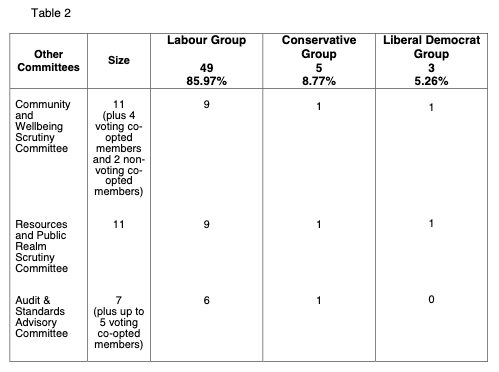 There are now single Liberal Democrats on the two key Scrutiny Committees alongside single Conservatives which should strengthen scrutiny if a good working relationship is established. However, Lib Dems are not represented on Planning Committee which given the prominence of a critique of new developments in their election campaign is a pity.  They also have one seat on the General Purposes Committee which in the last adminstration consisted of Cabinet members plus one Conservative. That arrangement has been criticised as being a Cabinet committee in all but name, thus centralising power, and it will be interesting to see how that situation developes.

The allocation of Liberal Democrat councillors is:

Community and Wellbeing: Cllr Matin with Cllr Lorber as first alternate and Cllr Georgiou as second.

It is worth noting the difference between allocation of seats in the council as a pecentage of the total  and the proportion of the total vote that each part achieved (latter in brackets).

Other constitutional changes are made in the light of the election result. With Liberal Democrats now recognised as a group alongside the Conservatives. Each opposition group will have the right to ask a question at Council and to put a motion.

Good news. Not enough opposition, but it's a start. However, when you look at the proportionality of it, it is profoundly unfair, and undemocratic. It is time for Proportional Rerpresentation.
William Relton, Co-ordinator Brent Greens.

And they don't dare go against the undeclared Tory Leader Butt