Brent Council’s written response to my Deputation to the 9 March meeting of the Resources and Public Realm Scrutiny Committee was finally received on 9 May!

Opening paragraph from the Housing section of the Poverty Commission Update report.

The response was meant to be from Cllr. Eleanor Southwood, then Lead Member for Housing, as my Deputation had sought proper scrutiny of the housing section in the Poverty Commission Update report to the 9 March meeting. The response has eventually come from a Council Officer, the Head of Affordable Housing and Partnerships. 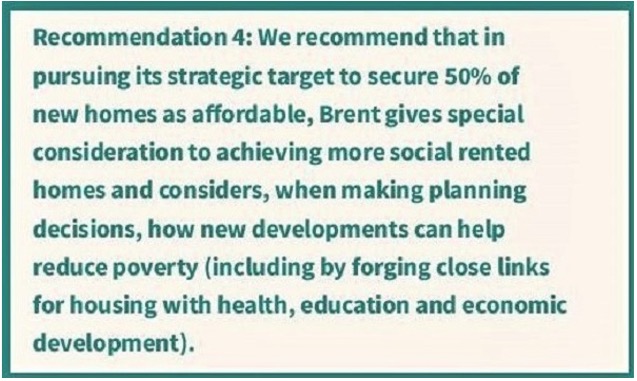 The Brent Poverty Commission housing recommendation on which progress was meant to be reported.

Before you read the response below, I would invite you to read my Deputation of 9 March (it should not take more than five minutes – the time allowed for members of the public to present a deputation to a Council meeting).

This is the full text of the Brent Council written response, as sent to me on 9 May. I have simply added, in square brackets, the full name of two items where abbreviations were used:

‘In reply to the presentation made by Philip Grant to the Scrutiny Committee I wish to make the following comments on behalf of the Affordable Homes & Partnership Department.

Firstly, to answer the comments made on the 655 homes already delivered and their tenure, taking each development in the order Mr Grant listed them.

•         Knowles House was purpose built as temporary accommodation to meet homeless needs it is not for permanent Council Homes.

The above is a snap shot of some of the ways the Council meets its statutory duties to provide a number of different homes and tenures to suit its different legal responsibilities.

LAR was the recommended GLA rental advice for many years and provided by Brent in earlier developments, following research by Brent Council on level of rental affordability within the Borough, the decision taken by the Council was to provide as much Social rented housing as was possibly viable on all future developments.

In 2021, following discussions with the GLA the council received £111m of GLA grant, this falls within the 2021 – 2028 programme and will allow the council to build 701 Social rented homes, which are currently in development and feasibility stages.

However with raising build costs it may be the case that in the future to achieve as many Social rented homes as possible the Council will need look at other forms of tenure, to cross subsidise the social rented.’

I asked the Council Officer who sent this to me to confirm ‘that a copy of this response will be supplied to members of the new Resources & Public Realm Scrutiny Committee, once that has been appointed at the Council's Annual Meeting later this month, and before the next meeting of that Committee’. That has now been confirmed.

Please feel free to add any comments on this response below. These could include suggested points that members of the new Resources and Public Realm Scrutiny Committee might like to raise, under matters arising from the minutes of the 9 March meeting (which have yet to be published).

I cannot praise Philip Grant enough for taking the Council to task on affordable/Social Housing issues. However, Scrutiny Committee need now to focus on where is the additional infrastructure promises on current completed builds. Wembley is particularly desperate for more Doctors Surgeries, NHS Dentists, Public Transport, Parking, and Amenity Space.

One example, now enshrined in the new Local Plan, is the new primary school for Wembley Park, which it still says will be built on the York House car park.