More than a hundred Brent allotment holders crowded into the Town Hall last night for a 'consultation' about the recent rent increases. Several people stopped me after the meeting to ask me what the point of consultation was when the increases had been announced before Christmas and approved at the February 28th budget meeting. Good question. 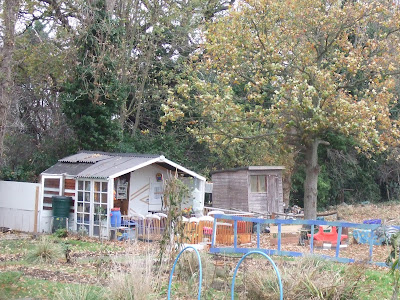 Councillor Powney was again in the firing line and faced a barrage of passionate and eloquent speeches from the floor which surpassed speeches made at other cuts protests. Alongside the fiery speeches there were also closely argued contributions challenging the legality of the increases and referring to case law.

Many speeches dwelt on the iniquity of rises of more than 100% and pensioners having to pay for their allotments for the first time - the concession will be 50% of the rental with the first five poles for £37.50. The average plot is 10 poles. Pensioners told the Cllr Powney (lead member for Environment) and Shaun Faulkner (Head of Brent Parks Service) how important the allotments were in enabling them to keep fit, get out and about, eat healthily, and socialise. "I can't afford the increase from my little pension and I don't want to get old and sick. We keep ourselves going, struggling to pay our bills. Why do we have to be left hungry?." said one pensioner.

Shaun Faulkner said that the Council were committed to the allotment services and recognised the many benefits t that accrued apart from the actual growing of crops. He claimed that even with the rent increases the allotments would still be subsidised and that improvements would be made from additional funds such as Section 106 money and the formation of partnerships. He said he didn't want to go back to the poor service that used to exist in Brent. In the past there was only a 30% to 40% uptake of plots but now there was a waiting list of more than 1,000 people. The rent rise might mean that some present allotment holders would reduce the size of their plots releasing more for people on the waiting list. He said his department was saddened by the increase and sympathised with allotment holders but 'a process had been gone through'. He added that he knew allotment holders were not making money out of their allotments, that they had to pay for tools, seeds and fertilizers; that they were not just about gardening but also a sense of community; and emphasised that he wanted to be honest with allotment holders.

Cllr Powney outlined the process, saying that a rental  comparison had been made with other London boroughs before the increase was fixed and that this process had been followed for other services. However I challenged him on this because earlier he had admitted that the Brent charge was the second highest in London. I suggested that if this was done on a comparative basis than it would have been fairer to set the rate at the average London level. He replied that it had been hard to get the figures out of other London boroughs and to make exact comparisons because of different rates and services.  He said the most expensive borough, Wandsworth was charging £20 a pole. In  response to the steepness of the increase for pensioners who had previously paid no rent he undertook to see if the increase could be staggered as it was a 'hardship issue', but warned that the money required would have to come from other provision.

The legal issues centred  around law which states that allotments are a recreational activity, should be subsidised and any increases should be in line with other recreational activity charges. Dr Franklin quoting case history from 1981 said that the increases were a tax on the poor and vulnerable. He said he was prepared to take the council to the High Court if necessary.  He urged those present to refuse to pay the increase and just pay their old rent when the bills arrived. Cllr Powney advised allotment holders not to take legal advice from a non-lawyer and stressed that the increases had been approved by the Council's legal department and that the Borough Solicitor was considering Dr Franklin's e-mail. He said that this was the fourth threat of legal action he had received in the last week. Challenged about the possibility of further increases Cllr Powney said he 'would be surprised if there were any further charges over the next few years".

Many of the audience complained about the lack of facilities on their allotments including toilets, footpaths and robust fencing. Those from the Dog Lane plots were particularly vociferous about the difficult conditions they faced on their waterlogged site. Cllr Powney suggested there was a contradiction in that the audience were opposing rent increases but also demanding better facilities. However, it does seem that forced to pay much more in rent there will be rising expectations of the service from allotment holders.

Declaration of interest: I cultivate an allotment at the Birchen Grove site, near the Welsh Harp and when I lived in Harlesden had a plot at Bridge Road.

As an allotment holder I attended the meeting last night and was struck by what a poor job the Council made of 'selling' these rent increases and also how badly briefed the lead member seemed to be on a number of points, specifically:

1. Cllr Powney began by saying that these increases had been forced upon them by Central Government reducing their grant support such that savings in the order of £40 million had to be found. However he was unable to say how much additional income would be generated as a result of putting up the charges. I suspect that the additional income will be a drop in the ocean and this begs the question as to whether it is worthwhile alienating such a worthy group of people as us allotment holders!

2. Officers admitted to difficulties in obtaining comparators from other LAs. Come on how difficult is it to obtain this information? All it takes is a quick phone call or looking at a local authority's website to obtain this information. Despite not obtaining a proper range of comparators Brent Council seem happy to align themselves
to Wandsworth (of all Councils!).

3. Perhaps if Cllr Powney had come to the meeting with some details of a long-term capital investment strategy for allotments in Brent then this would have helped to sweeten the pill a little. It would appear that investment is made on an ad hoc basis driven by planning gain monies coming from developers and not the Council.

4. Many people at the meeting complained about the poor level of service they felt they received. As well as sites lacking basic amenities there were also problems with poor security, rubbish on sites, grass not being cut, etc. Surely if Brent want to provide a vibrant and successful allotment service then they need to address these issues rather than just putting their fingers in their ears (metaphorically speaking). Brent's position seemed to be you pay little rent and allotments makes a loss so you should expect a poor level of service.

4. I suspect that Brent are starting from a historically low level with their allotment charges. If this is the case then there is a strong argument to phase these increases in over a period of time.

5. This dramatic increase in charges will inevitably result in changes to the socio-economic profile of allotment holders. It may possibly result in an increased vacancy rate, more turnover in allotment holders, etc. Something tells me that the Council have not thought the implications of this one through. But then again maybe they are happy to preside over the long term decline of these troublesome allotments so they can sell the sites for more Lego style housing and fund a new Civic Centre - but don't get me started on that one!