Lock Down as Academy Forced Through 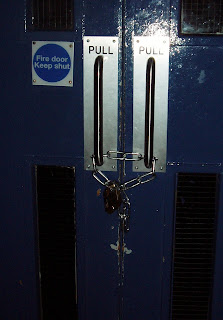 The governing body of Claremont High School approved the school's conversion to an academy  after campaigners claimed the headteacher had doors padlocked, brought in extra security and made areas of the school no go areas to prevent lobbying by parents and staff unhappy with the what they see as lack of consultation and accountability. The decision is controversial because nearly three quarters of all staff, teaching and non teaching, at the school had voted NO in an independently overseen secret ballot. The school has now written to parents to say the school will be an academy from April 1st.
Parents who turned up to a meeting organised by the unions on Wednesday had voiced concerns that they had not had the opportunity for proper consultation. There had been no meeting where they could have heard pros and cons, asked questions and debated the issue. Therefore the next day the Headteacher received many emails from parents asking for a delay in making a decision until consultation in the form of a meeting for all parents had taken place and some asking for a ballot similar to the staff one.
Comments from the emails included:

“We are concerned that there has been no consultation with any parents or any concrete information indicating what implications these changes would have for the future.”

“As parents, we think it would be democratic if there was a meeting and a ballot with the parents of the school before any final decisions are made.”

“An e-mail … voicing our concerns ... you failed to respond, thereby confirming our suspicions that there would be no meaningful consultation over these plans.”


“As you are aware the majority of staff have objected to this application .  There must a very good reason as to why so many of them feel so strongly.”
“I do not feel I have been properly informed about this change and DO NOT wish for this important change to happen without more discussion.”

Parents were astounded that they were not allowed into the school yesterday to make these points in person. They told staff outside the school gates, who earlier had been banned from lobbying the meeting or even delivering letters appealing for a delay, that it was appalling that parents could be treated in this way. They felt it was undemocratic and demeaning to treat the parents of the children who have made Claremont an outstanding school in such a manner.
The unions had written to the Headteacher and Chair of Governors stating that there would be industrial and legal action unless the decision was delayed as the governors had not followed the proper legal processes during consultation.
Claremont Teaching Unions' Appeal to Governors HERE
Posted by Martin Francis at 17:03:00