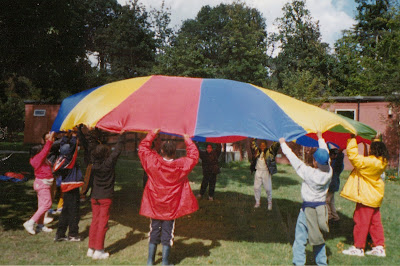 "Join us in playful protest on 26 March as part of the national March for the Alternative, taking place in response to the government's programme of fast and deep public spending cuts."

Play England and Unite's Community and Youth Workers section are proposing this under the banner of the Play England led campaign, Save Children's Play. Thousands of children and young people will be affected by cuts to play services, so join your fellow play people on 26 March and stand up for play!
The main march will gather on Victoria Embankment and form up between Waterloo and Blackfriars Bridges from 11am. We'll be coordinating a meeting point close by where we can all gather and head down together.
We're looking to create a carnival atmosphere to demonstrate the positive impact of play. Come playfully armed, with space hoppers, hula hoops, skipping ropes, juggling balls, musical instruments, stilts, you name it!
You can pledge your attendance here: www.facebook.com/event.php?eid=118080668268454. Don't forget to put the date in your diary and forward the link to all your friends and colleagues in play. You can share your playful ideas for the delegation and keep informed about the plans via the Save Children's Play Facebook page. Visit www.facebook.com/savechildrensplay, and don't forget to 'Like' us! If you're not on Facebook , email us at savechildrensplay@ncb.org.uk to receive updates about the march and register an interest.
Let's make some noise for play!
Unite has also launched a survey to gauge the effects of cuts to play services. The survey can be accessed at www.surveymonkey.com/s/BYJSPW7 and runs until April.
Posted by Martin Francis at 17:00:00