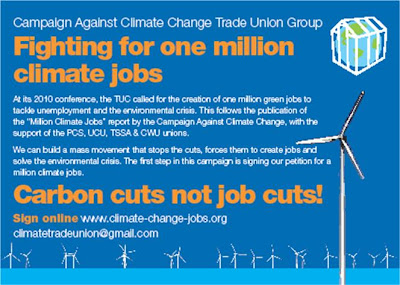 The national petition for "One Million Climate Jobs" has now been launched ahead of Saturday's TUC demonstration.
The petition is endorsed by John McDonnell MP, Caroline Lucas MP, Linda Riordan MP, Kelvin Hopkins MP and Sally Hunt, General Secretary UCU.
We aim to increase the pressure on the government to solve the economic and environmental crises through the urgent creation of One Million Climate Jobs.

Please sign the petition and encourage your friends, colleagues, fellow trade unionists and other campaigners to add their name. There is a PDF version available for download from the site which you can use on transport to the demonstration on Saturday.

This is what the petition says:


We the undersigned call on the Government to give urgent and serious consideration to the recommendations of the One Million Climate Jobs report including:


You can sign the petition HERE
Posted by Martin Francis at 17:36:00