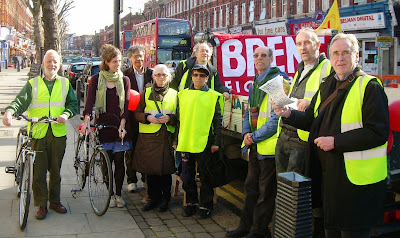 Brent Fightback supporters gave out between 1,000 and 2,000 leaflets today in a four hour cavalcade of cycles and cars, led by a decorated lorry through the streets of Brent accompanied by boucing balloons, cheerful car horns and a tireless PA system publicing next week's TUC March for the Alternative.  Stops were made at Harlesden Jubilee Clock, Wembley Central Square, Wembley Park ASDA, Neasden Shopping Centre, Cricklewood Broadway and Kilburn High Road.

It is always hard to leaflet busy shoppers, but those who stopped to talk were very concerned about the cuts and some spoke about already being hard up and how they would be hit really hard. They were pleased that there was a campaign and a march even if they themselves couldn't make it next week. However it was heartening to hear how many were already intending to come.
Posted by Martin Francis at 19:38:00

Sharly in the Red Car said...

I was somewhat skeptical as to whether any of our energies would make a blind bit of difference! I am used to unabated enthusiasm down my life's way being met with a blank wall of apathy!!!!

I was quite astonished to see such a welling up of support and smiles on faces amongst whomever we met right across all the classes/ethnicity and races of Brent!!! I have never seen eager people coming up and taking leaflets from cars and canvassers alike, in such proportions! As we reached the end of Ealing Road & turned around to drive back to Wembley to meet up again with the leafleters - I could see considerable numbers of oncoming pedestrians carrying leaflets - which you foot soldiers must have plied them with and they had accepted or snatched off you!!!! In Asda car park I even saw people politely queuing for leaflets or asking through the windows of our cars!!!

It was a regaling sight indeed!!!! All these years of campaigning - are people beginning to see the light??? Are they beginning to be angry enough at the full scale injustice of the rich manipulating the poor, under-privileged, disadvantaged and dispossessed?