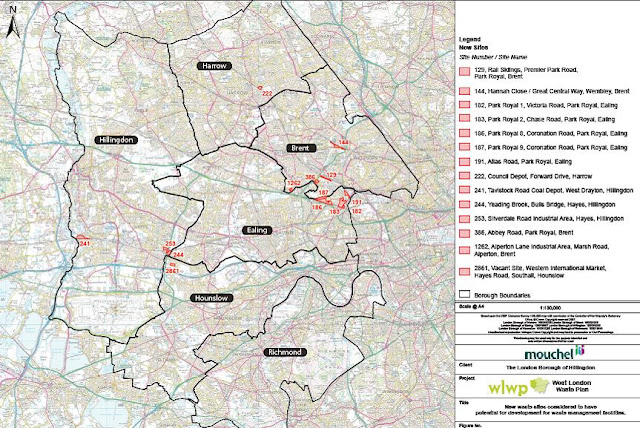 Consultation closes on Friday on the draft Waste London Waste Plan. The consultation has hardly caused a ripple in Brent with only a handful of members of the public, as distinct from potential contractors, turning up at the consultation at Bridge Park.  However the Plan may have big consequences for Brent with unknown new processes taking place in the borough and a potential increase in heavy lorries transporting waste through the borough from the other boroughs as you can see from the map above.

Brent already has waste sites at Abbey Road and Veolia's transfer station in Marsh Road but additional sites are being considered in Park Royal in both the Brent and Ealing sectors. Additional facilities in Marsh Road seemed to be a favoured option in conversation with officials at the consultation meeting.

The most troubling aspect of the plan is that the choosing of sites has been separated from the processes that will take place on them.  The processes will form part of later planning applications so we are being asked to comment about sites without knowing the repercussions in terms of emissions, health and safety and traffic.


When I asked the consultants about a missing table, describing possible waste technologies that could be deployed at the sites in question (a lot around Park Royal and none in Richmond, in fact) they repeated the mantra about the consultation being technology neutral, and have removed the reference to the table altogether in the online version now.

But they didn't deny that incineration could be deployed at these sites.

In contrast with Brent there was a well attended meeting in Ealing (Park Royal) where residents were horrified by the concentration of sites in the area.  Some residents were already upset about the 'stink' on the border with Hammersmith and Fulham from the Powerday facility.

Consultation ends on Friday March 25th at 5pm: To comment follow this LINK
Follow this LINK for an independent blog about the West London Waste Authority