Cuts - where do we go from here? 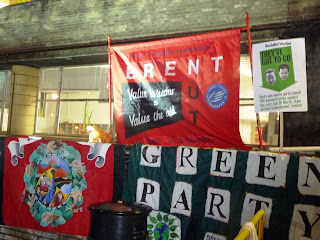 There is an organising meeting of Brent Fightback tomorrow Monday March 7th, 7.30pm at the Trades Hall/Apollo Club, Willesden High Road and Brent Friends of the Earth have a meeting on 'The recession and its impact on the environment and the green agenda' at the Rising Sun, Harlesden Road,  7.30pm on Tuesday March 8th. Fightback will be assessing the effectiveness of the lobby of Monday's Council meeting and the current position regarding cuts, planning for the March 26th demonstration, and reviewing future strategy.

The upshot of the Council's decisions is that there were some concessions after community campaigning:  reprieves for the Wembley youth clubs (albeit with two merging), restoration of funding (with 12% cut) for the Law Centre, Citizen's Advice and Private Tenants Rights Groups; reprieve for the Welsh Harp Environmental Education Centre (with 50% private funding from a local builder).

There may be a temptation to attribute these successes to effective campaigning  but libraries, where campaigning was most vociferous and got national coverage, are still likely to close. Campaigners are rightly asking how the council can set a budget which assumes their closure before the consultation ended. Cllr Powney tries to answer that point HERE  There are also murmurs amongst some councillors that the reprieves are more to do with the Labour leader's 'pet projects' than pressure from rank and file Labour councillors.

Apart from the library campaigns feeling let down by the Council there is also unhappiness in the Charteris Sports Centre campaign where the Council led them to think there was a possibility of a 'Big Society' option (the Campaign was notably absent from the lobby on Monday)  but they have now been told them the Centre will close at the end of March. The issue of the Council stemming/diverting opposition by dangling 'Big Society' possibilities and then going ahead with closure is likely to rankle for some time. This goes alongside the short-term impact of the Council's barring of the public from  the budget meeting and the joking and bantering behaviour of some councillors during the meeting.

Only one Labour councillor abstained on the budget.  Other potential rebels, as I predicted, were brought into line by the concessions. We need to re-assess our future relationship with Labour councillors and the potential for joint campaigns after Monday's decisions.  In terms of the Labour Party generally there has been little lead from Ed Miliband, or the London-wide party, on fighting the cuts.

As far as school budgets go, in the two schools where I am a governor we have been looking at the budget for 2011-12. As predicted although the budget figures are stable they disguise the fact that more services will now have to be bought in at higher prices and there will also be inflation in the price of resource and utilities. In my schools, because of relatively high numbers of children on free school meals, there is some cushioning from the pupil premium, but schools with lower numbers of FSM will face budgetary constraints and may have to make staff redundant. These are likely to be classroom assistants, school meals supervisors etc. There will also be pressure to employ contractors for cleaning etc, who pay lower hourly rates than the Brent Council rates - without pension contributions and holiday pay.  At a broader level as central services provided by the Council are reduced, cut or charged at higher prices, there are likely to be more calls for schools to end their links with the local authority and apply for academy status.

So we are likely to see  libraries and the Sports Centre being closed at the end of March, some redundancies/non-renewal of contracts in schools from April, and the national measures (VAT increase, child benefit freeze, public sector wage freeze, cuts in childcare element of the Working Tax Credit) kicking in at the start of the new financial year.  The latter will see an increase in child poverty and problems for families in finding the cash to pay rent/mortgages (council rents are also going up). There will also of course be a rise in local unemployment as public sector job losses mount. The Housing Benefit cap does not now come into force until 2012 but already private landlords are serving eviction notices on tenants they anticipate will not be able to afford the  rent under the cap.


The Friends of the Earth meeting is relevant as it brings a wider perspective which raises the issue of the wider economy. There is now a developing consensus that the post-Big Bang domination of the economy by the financial sector must come to an end but the Coalition, with its anti-state intervention stance, has little to say about the necessary re-structuring. Ed Miliband in his speech to the Resolution (not Revolution!) Foundation on February 28th admitted that the Labour Party was wrong not to focus more on the type of economy they were building, the need to 'break out of the low-pay, low-skill cycle' and the need for high quality jobs. He also supported the introduction of a living wage.  We would go further in wanting to discuss the restructuring of the economy to gear it towards sustainability with the creation of skilled, socially worthwhile employment that both combats climate change and tackles inequality and poverty.

The question now is where does the anti-cuts campaign go from here?  What should be our objective/s? How can we be pro-active, putting forward alternatives, rather than be merely reactive?
Posted by Martin Francis at 13:58:00