Dame Betty on a Mission

Dame Betty Asafu-Adjaye denounced the Scrutiny Committee on Wednesday after they refused to reconsider the case for closure of the Mission Dining Club in Harlesden which has served the community for 23 years. Dame Betty is a founder of the club that offers a social eating experience and other activities to the elderly, disabled and socially isolated of Harlesden.

The Council wants the land on which the Club is built in order to expand Newfield Primary School. The Club was supported by Brent Law Centre and other advocates.

The familiar objections were a failure to consult, failure to communicate, the lack of an Equalities Impact Assessment, and a failure to consider alternatives. This appears to be a developing pattern with Brent Council actions to which one can add the case of the libraries where Monday's Council Meeting appeared to confirm the closures before the consultation had finished on Friday.

There was also the usual Council confusion over its properties: whether the Mission Dining Club owed rent, the precise meaning of the original agreements with its clause about the right of the council to claim a commercial rent,  and a general vagueness.  The Council claimed that it had done an Equalities Impact Assessment but councillors couldn't agree on whether they had seen it or not and it certainly hadn't been seen by Dame Betty.

There was discussion about whether the very small footprint building could be re-sited on a section of  the green open space next to the school. Officers claimed that there would be protests from residents about the loss of open space and Councillor Crane suggested Brent Green Party would object. In fact when I lived in  Harlesden and used to collect a child from Newfield, I remember the green space as being virtually unusable because of the amount of dog excrement on it. It may have changed over the past 10 years of course, but anyway the building's footprint is very small. 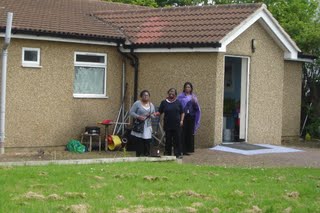 The Planning Committee had deferred hearing the application because of the lack of consultation. Surely it cannot be beyond the wit of the Council to come up with a solution in the meanwhile - perhaps incorporating space in the new school building for the Dining Club which would have multi-generational advantages. The space could be used by the school when not being used by the Club.