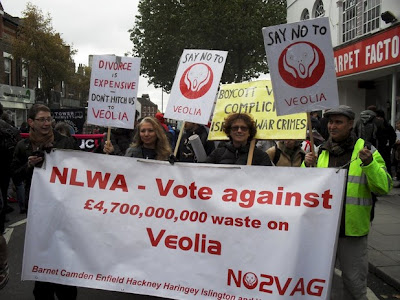 Greens and others fighting a proposed  incinerator in Pinkham Way and campaigning against Veolia being considered for a valuable waste contract by the North West London Waste Authority, got some good news yesterday.

The NWLA have withdrawn their planning application for a mechanical and biological waste treatment plant in Pinkham Way. Originally this was to be one of two sites but it now appears that only one will go ahead and subject to a successful planning application, that will be the Edmonton site. It is likely that a campaign will continue against this site too.

Greens have also supported the No2Veolia Action Group (NO2VAG) which has sought to get Veolia rejected as a possible bidder for the NWLA waste contract on the grounds of its abuse of human rights in the Occupied Territories of Palestine. Veolia announced yesterday that it was withdrawing from the bidding process for the £4.7bn contract.


Barnet Greens welcome the withdrawal of Veolia and the scrapping of the Pinkham Way plan. We call on the NLWA to abandon the disastrous procurement process -- ie privatisation - and to keep its waste services in house while it researches the various viable alternatives now available to incineration of waste or dumping of rubbish to landfill.

The NO2VAG campaign which has been energetically spearheaded by Yael Kahn and Rob Langland  stated:


For two years the No2VAG has vigorously campaigned for Veolia to be removed from the list of bidders due to its grave misconduct in providing infrastructure to illegal Israeli settlements. Despite this involvement and its dire financial, health, safety and environmental record, Veolia was shortlisted for the final bids in February 2012.

This extraordinary withdrawal of Veolia comes after an intensification of the campaign against the company. The No2VAG staged twelve protests over the last two months at each council contributing £600m to the £4.7bn contracts.

The procurement process was shrouded in secrecy and campaigners faced a wall of denial when it came to Veolia’s unethical practices, environmental and technical shortcomings and financial instability. Engineer Rob Langlands and secretary of No2VAG said:


North London residents want an environmentally responsible and cost effective solution to waste disposal. The Veolia technical proposals were not on track to provide this. I am especially delighted because of the ongoing Veolia involvement in the illegal Israeli settlements that the Veolia bids have now been consigned to the rubbish bin.


Our strategy to force councillors to seriously consider and publicly debate the issues at stake and the further actions planned No2VAG played a critical role in achieving our aim of eliminating Veolia from the NLWA procurement process.

But working-class Edmonton gets stitched up? Bad.

And what happens about Harlesden's incinerator now?

I am sure the campaign will switch to Edmonton now. Harlesden is in the West London Waste Authority area and wasn't on the published list of possible sites in the WLWA consultation. That fact should help the campaign which seems to be gaining a lot of community support. We really need a London-wide anti-incinerator movement to prevent divide and rule.