Climate Change - Deadlier than the Deficit 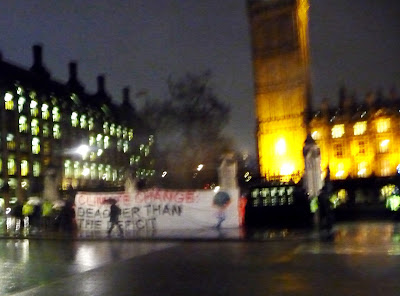 On a wet and windy Westminster night a banner was briefly unfurled yesterday outside Parliament reading 'CLIMATE CHANGE - DEADLIER THAN THE DEFICIT'. We were demonstrating against the Energy Bill which despite Coalition PR gives the go-ahead for nuclear and fracking and does nothing to support green solutions to the energy and climate change crisis.

John McDonnell MP addressed the demonstrators from various campaigning groups and I spoke as a member of the Green Party and Campaign Against Climate Change on the need for a restructuring of the economy and a defence of the welfare state.. The recently formed Campaign Against Fuel Poverty made the connection between fuel poverty and child poverty.