The identity of the potential purchaser of Brent Town Hall is the subject of some speculation following the Council's decision to keep many documents secret at the recent Executive that approved sell-off plans.

The disposal of the site is not as straight-forward as first thought. The report to the Executive noted:


The Town Hall land is subject to a number of covenants including a covenant that no part of the land shall be used for any noisy noisome or offensive trade or for the erection of workmen’s dwellings or flats for the housing of the working classes other than such quarters or caretakers lodgings as are usual and necessary in connection with a Civic Centre.

There is the risk that the above covenant could be capable of being enforced by injunction thus preventing the construction and use of the site for a redevelopment consistent with the Town Hall Planning Brief. The appropriation and use of Section 237 powers is required with the object of removing this risk and to facilitate the carrying out of redevelopment scheme.

The application of Section 237 powers would ease the problems although there is still a risk of legal challenge. Another issue is that the site includes open space in the marriage garden that borders The Paddocks. I for one missed the following advertisment in the local press:

The site concerned can be seen in the pan below and covers a considerable area: 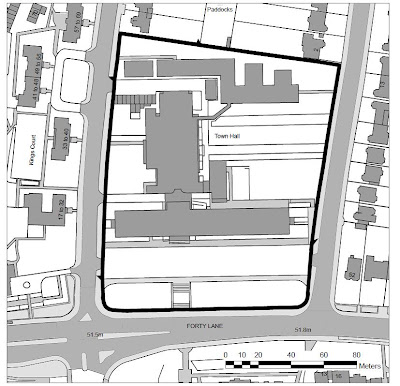 There have been rumours in the past about the possibiolity that the site could be used as a school and the need to address the problem of  'noisome uses' and the inclusion of the public space might reinforce that. The need for getting maximum profit from the site and the proxomity of the Ark Academy  had seemed to make that unlikely but the report includes this intruiging passage - again we don't have sit eof the confidential item in question:


Members are asked to note the confidential letter received at Appendix 3.

As the Executive is aware from the report considered at its August meeting, the Council is projecting a shortfall of school places and has developed plans to expand primary provision. In addition, proposals to increase secondary provision (where the demand is manifested in later years) will be brought to the Executive for consideration in January.

The Town Hall is not identified specifically as an education site and is not factored into any of these plans, firstly (in terms of secondary provision) because of its close proximity to Ark Academy and secondly because its sale at market value is required to enable the Council’s move to the Civic Centre.

Education uses outside the state-funded sector on this site might have some wider benefits for the local population but their impact would be mainly neutral in terms of their impact on local state education provision.

The last paragraph seems to suggest that there might be the possibility of use by a private school. The Swaminarayan may have decided not to apply for free school status at present but would they be interested in this site?  It is a long way from the Swaminarayan Mandir but is more central and closer to Harrow which supplies many of the pupils. The school told me last month:


The Swaminarayan School is considering applying for Free School status. Whilst we have not found a site, we would wish to locate to a site in the heart of the Hindu community. The excellent education that the school provides at present will be open to all.

Even if free school status is rejected, would they be interested in a prestigious site such as the Town Hall?  Is it 'in the heart of the Hindu community'?

This is pure speculation but I did report back in May 2009 LINK that the Swaminarayan were considering a move to the north of the borough. This would free the present site, which used to be that of Sladebrook High School, as a possible site for a much needed secondary school in the Harlesden area - with the added bonus of the neighbouring Centre for Staff Development becoming free when it moves to the Civic Centre in Summer 2013. As I said pure speculation....

Meanwhile the report approvingly notes that in the bidder's plans for the Grade II listed building::

The key ‘character spaces’ in the existing building are thoughtfully used with minimum design intervention, and the extensions are shown in locations that the brief identifies as being suitable for additional building/enlargement.