Bob Blackman hoisted with his own 'one man, one woman' petard 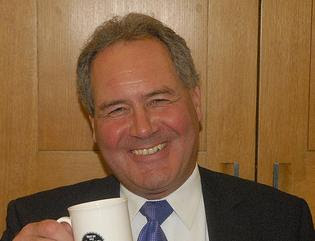 Bob Blackman former  Leader of Brent Conservatives and now MP for Harrow East gets front page treatment in today's Sunday Mirror .LINK Cllr Carol Shaw, now a Lib Dem councillor but previously a Conservative councillor alleges the two had an 11 year old affair behind Blackman's wife's back, while they were both Brent Tory councillors.

Normally I wouldn't be interested in this, and the article has 'too much information' for my taste but it is politically relevant because Blackman recently came out against gay marriage, insisting that 'marriage had to be between one man and one woman'.

In this case it is a question of the personal is political.

Whilst he was leader of Brent Conservatives disputes arose which led to the formation of a 'Democratic Conservatives' group.  The disputes weakened Brent Conservatives and they were reduced to a rump at the last local elections and Barry Gardiner strengthened his position at the General Election in a seat formerly held by right wing Tory Dr Rhodes Boyson.

Many would dispute the Mirror's description of Blackman as a 'Top Tory'. However, he has attracted a lot of controversy and years ago, Ken Livingstone, in a parliamentary speech, accused him of being a ' municipal Robert Maxwell' LINK

On the other hand I found him an ally in the battle against the Ark Academy in Wembley when we were among the speakers at a public meeting at the Torch Pub in Bridge Road and both members of  a delegation to the GLA which also included Barry Gardiner MP.
Posted by Martin Francis at 15:25:00