'Green' Civic Centre to be surrounded by huge car park

Brent Council has been boasting about the controversial new Civic Centre's green credentials but one green credential - accessibility based on use of public transport - has been unpopular with councillors themselves and with many staff.

Anyone seeing the packed car park at Brent Town Hall for the recent full Council Meeting, and the overflow on King's Drive, could see that it might be hard to prise councillors out of their cars. Watching the area around the Civic Centre being levelled may have aroused suspicions amongst locals.

Muhammed Butt promised grumbling Labour councillors that he would see what he could do and 'Hey Presto!' the council has received a planning application for a temporary 1,350 space car park in the land surrounding the Civic Centre (the unnamed rectangle on Engineers Way below): 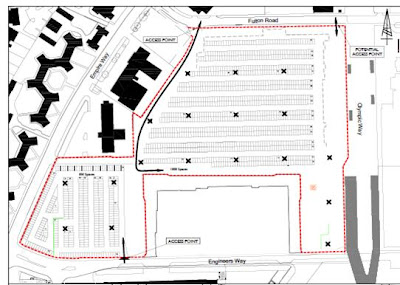 The original plans for Quintain's redevelopment area did include 3,000 plus car parking spaces in the area although the Stadium was sold as a public transport destination. The nearby multi-storey car park is being demolished as part of the Designer Outlet development. The car park above would only be temporary while another parcel of Quintain land is developed and the developers argue that it does not increase the overall number of parking spaces.  Clearly the car park  will occupy a large and lucrative site that Quintain will eventually want to build on.

The plans will keep councillors quiet for a while but they will not be able to get too comfortable with their new parking facility.

Nearby businesses and schools currently make money from event day car parking and this income  is likely to be hit by the new car park which will be much more accessible. It remains to be seen how much councillors and council workers will have to pay for their parking and whether Quintain will offer them a reduction compared with the general public.

Brent Labour are so full of BS!