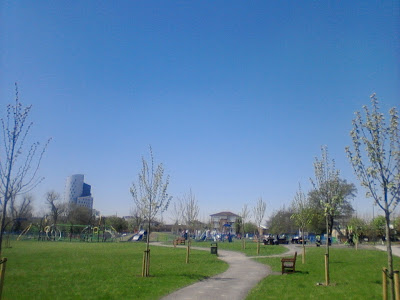 Builders' fences were removed from Chalkhill Park today after a final surge of activity to get the park ready for the Bank Holiday.

News reached Chalkhill Primary School at lunchtime and spread like wildfire around the playground to cheers from the children.

The weekly School Walking Club were the first to officially use the new facility.  A landscape gardener, stripped to the waist and pushing a laden wheelbarrow, stopped me and said, 'This makes it all worthwhile. The children's faces as they swarmed into the park were wonderful. It was amazing It was worth all the work.'

Parents and children rushed to the park after school and there was widespread praise from the former for the design. Children were too overcome with excitement and breathless from trying everything out to say very much but their big smiles told their own story.
Posted by Martin Francis at 18:55:00