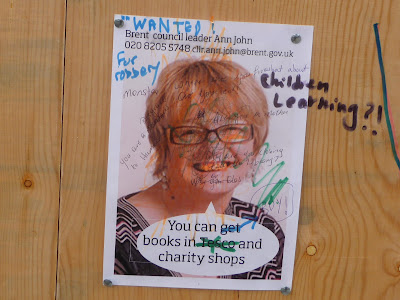 It's a bit like one of those property programmes on TV when an 'expert' moves in to help sell a house that hasn't attracted any buyers and proceeds to move out all the old furniture and give it a lick of paint and other cosmetic touches..

This is what Brent Labour appear to be doing, with first the new look Executive replacing some of the tired veterans, and now Ann John has been deselected making way for a new face.  John's demise will appear to many as the result of library closures coming home to roost. James Powney failed to make the short-list for his own Kensal Green ward but could apply for another ward.

Mindful of Harold Wilson's dictum that 'a week is a long time in politics' Labour will be hoping that the electorate will be impressed by their spruced up property when it goes on the market in May 2014.

Certainly the new lead member for Environment and Neighbourhoods, Cllr Roxanne Mashari, will have to do far more than apply cosmetics if she is to deal with the toxic issue of library closures with the campaigns still up and running and the umbrella SOS Brent Libraries group due to meet at the weekend.

They are dropping like flies. Ann John, Janice Long, James Powney all deselected by their wards - will they have the bravery to try for other wards or just give it up now and avoid embarrassment? Sources suggest that Mary Arnold wanted to avoid the humiliation of deselection so jumped before she was pushed.

Who is the 'expert'?

Oh Brent Labour, you can't polish a turd - but you can spray it gold and sprinkle it with glitter.

Michael Pavey asked me to post this response: Far from being at risk of deselection in Kilburn, Mary Arnold was shortlisted unanimously and would almost certainly have won comfortably. She received a unanimous vote of thanks for her excellent service at the selection meeting last night.