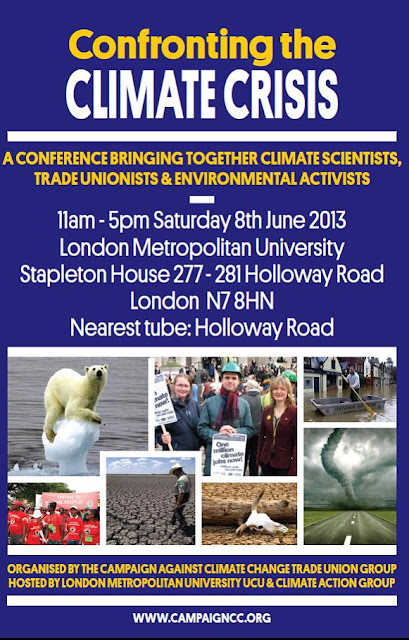 The conference aims to put the climate crisis at the centre of the debate about how to deal with the economic crisis. We need to find alternatives to the government's austerity programme designed to deliver jobs and move us in the direction of a low carbon economy.

This is part of an interview with Graham Petersen, the UCU's national environment co-ordinator, on the current Red Pepper website. The full interview can be found at
http://www.redpepper.org.uk/confronting-the-climate-crisis-graham-petersen-interview/

Graham is one of the many trade unionists who will be contributing to the "Confronting the Climate Crisis" conference on June 8th. Others include officers and rank-and-file members the CWU, FBU, PCS, TSSA, Unison, Unite, and several other unions.

They will argue that in its impact of the price of food, the prospect of harsher winters and larger fuel bills, and the potential for creating climate jobs, climate change is already, in Graham's phrase, a "core organising issue" for the  unions. But there is a larger issue.

In the past the trade union movement was in the forefront of campaigns on the great moral causes of their age, from the anti-slavery movement in the nineteenth century to the anti-apartheid movement in the 1980's. The First International was launched by trade unionists to support the cause of Polish independence.

The challenge of not leaving to our children and grandchildren a planet devastated by climate chaos is the great moral cause of our age. In the words of Suzanne Jeffery, Chair of the Campaign against Climate Change Trade Union Group, the June 8th conference is an opportunity for today's trade unionists to "step up to the mark" as our predecessors did.

Register for the conference now at  WWW.CLIMATETRADEUNION.EVENTBRITE.COM. Alternatively send your details (including return address) with a cheque made payable to Campaign against Climate Change, to Martin Empson, Canon Green Court, West King Street, Salford, M3 7HB.

You can also join our facebook event at https://www.facebook.com/events/156810361152225/ and help to generate interest in the conference by tweeting your comments using the hash-tag #ctcc2013.