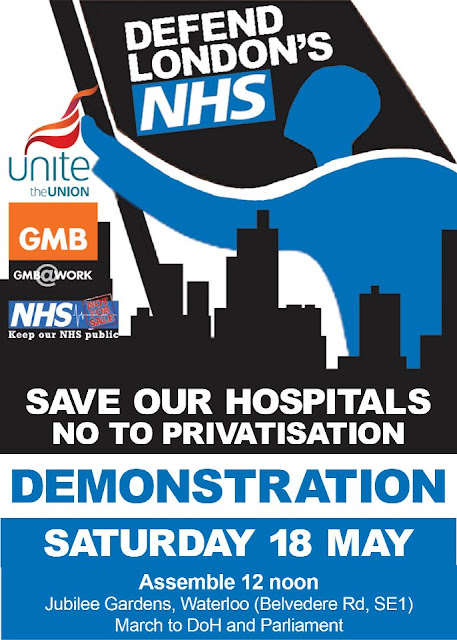 I hope to see London Greens out in force tomorrow at the Defend London's NHS protest  as well as some of the new Brent Council Executive A contingent from Brent Fightback will be there. They will be meeting on the Southbound platform of the Bakerloo line at Baker St at 1130 tomorrow to travel on together to the demonstration at Waterloo.
London  Green MEP Jean Lambert has called on the government to halt the closure of up to nine accident and emergency wards in hospitals across London.


The wards are scheduled for closure, as well as thousands of hospital beds, in what the Keep Our NHS Public coalition has described as ‘the biggest attack on our NHS in a generation’.


Lambert, who will join thousands of people from across the UK in a march to the Department of Health to protest against the closures – and the threat of hospital and community health services being taken over by private companies, said:


This Government promised to defend the NHS – but the reforms it has introduced have done exactly the opposite.


As well as privatising services – allowing Tory donors like Care UK to offer public health care - its cuts and austerity program has caused plans to close hospital wards across the capital.

Greens believe in an adequately-funded publicly-provided NHS, run in the interests of people – not profits – and I will be proud to march tomorrow alongside some of the millions of NHS workers and patients who agree.”