Social cleansing through redevelopment in Barnet? 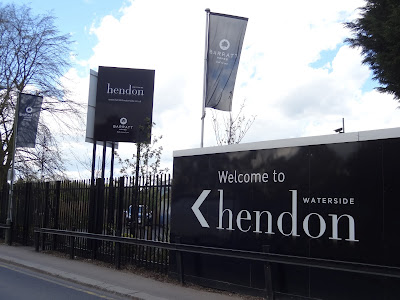 I popped down to the Barratt Homes Sales Office at West Hendon (oops, sorry it has been rebranded hendon WATERSIDE) on Saturday.  I was told that there was just one apartment left in the recently completed block for £340,000 and Shahrar Ali making a similar visit was told that in addition there was an annual service charge of  £1,700 and a binding contract with a single water and energy provider.

The salesperson made it quite clear that the private apartments would be at the waterside with uninterrupted views of the Welsh Harp (see brochure illustration below) and that the replacement social housing would be away at the back of the site near the A5. 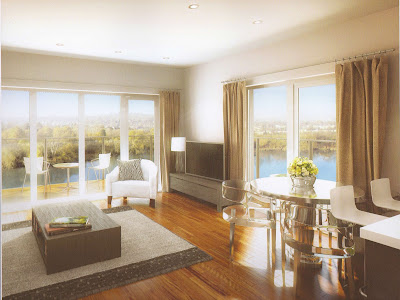 Leaving the sales room and going on to the West Hendon Estate top speak to the tenants whose homes will be abolished under the scheme was entering another world.

One mother said she had heard nothing and wanted to stay in her present house while another woman who uses a wheelchair had been told she couldn't  have a ground floor flat in  the new development.

There was little doubt that the estate (above) had been neglected and some residents felt this was deliberate in order to justify demolition. They said windows and doors were badly fitting and let in the draughts and described water cascading down the walls.

However, the possibility of getting a better home through re-development was received with scepticism. They said that the likely rents (and the water and energy bills) would be too high for them to be able to afford and that many existing tenants would be likely to have to move out.

What was clear from a brief tour and chats  with residents that this works as a community and it is one that is soon to be violently disrupted and split up.

It appears that eventually there will be middle class professionals enjoying their views of the Welsh Harp on the banks of the reservoir, those few  tenants who can afford the higher rents in the social housing blocks and the poor displaced somewhere else - a model of social engineering (or social/ethnic cleansing?) that Lady Porter would have applauded. Only 20 of the 2,000 housing units will have 3 or 4 bedrooms when there is a great need for family housing.

The existing open space (below)  will be much reduced in the proposed development and this is something that also concerned the existing residents. The open space that is being sold to the private purchasers is the Welsh Harp itself with pedestrian bridges across to the other side of the reservoir. The development itself will be high density. 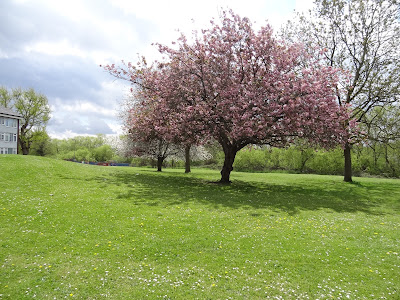 The illustration of prospective residents from the Hendon Waterside brochure tells us much about the sort of people that Barratt Homes (and perhaps Barnet Council?) are seeking to attract. 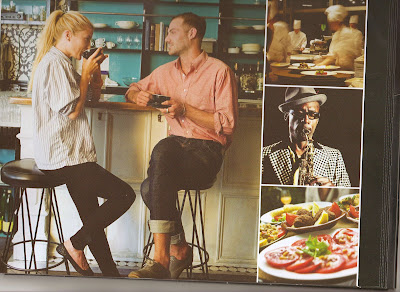 It's a wonder they didn't throw me out of the Sales Office!

Is the undercover video appearing on the web?

You need to hitch up your trousers and groom your facial hair in an 'ironic' fashion next time.
Alex C

You are right. Shahrar was much more convincing than me as a potential buyer!